On May 6, 1962, a metallic fast bowler entered this world. Neil Foster is remembered more for his injuries than his cricketing sojourn. A fine cricketing career was curtailed by barrage of injuries so much that once an airport metal detector was set off when Foster, who had metal plates in his body, passed through it. One of the most promising careers was truncated at 31, courtesy of yet another injury. Sarang Bhalerao looks at the cricketing career of one of England’s most promising fast bowlers: Neil Foster. On May 6, 1962, a metallic fast bowler entered this world. Neil Foster is remembered more for his injuries than his cricketing sojourn. A fine cricketing career was curtailed by barrage of injuries so much that once an airport metal detector was set off when Foster, who had metal plates in his body, passed through it. One of the most promising careers was truncated at 31, courtesy of yet another injury. Sarang Bhalerao looks at the cricketing career of one of England’s most promising fast bowlers: Neil Foster.

Twenty nine Test matches and 48 One-Day International (ODIs): these numbers dissatisfy if you consider Neil Foster represented England for a decade. But Foster’s perpetual dalliance with his injuries was responsible in cutting short a promising cricketing career. He had as many as nine knee operations which doomed his promising career.

Foster suffered from bouts of back spasms in the early part of his domestic career for Essex. The specialists diagnosed in two vertebrae near the base of the spinal cord. The doctors hoped that a corset of plaster would help in healing the injury internally. That proved to be a wrong prognosis as Foster’s condition worsened which forced the surgeons to insert a six-inch metal plate in his back.

In August 1983, England chose Foster against visitors New Zealand for the first Test at Lord’s. Shortly before the Test match his back condition worsened as one of the screws supporting the metal plate had loosened. Foster was forced to drain the fluid twice a day during the Test match. The debut amidst this physical discomfort was unsatisfactory.  Foster took just one scalp in the match, bowling a total of 28 overs spanning across two innings.

After his uneventful debut, Foster toured New Zealand in 1984. He picked up four wickets at an average of 57.25. Yet, after two months, he made the cut in the team that toured Pakistan. Foster registered his first five-wicket haul in the third Test at Lahore thus vindicating his faith in the selectors.

This tour was the watershed moment in Foster’s career. Injuries to Paul Allott and Richard Ellison paved way for Foster’s selection. Ignored for the first three Test matches, Foster made it to the fourth Test match at Chepauk. He had picked up a five-for against the South Zone just before the Test which made his case just a bit stronger compared to Jonathan Agnew. The five-match series was level one match each.

The wicket was green and Indians adopted an aggressive approach from the beginning. Sunil Gavaskar, the Indian skipper, took 10 runs off Foster’s first over. In his third over Foster bowled Gavaskar neck and crop for 17. The Indians still went after the English bowling. After lunch, Foster removed Mohinder Amarnath (78) with an out-swinger while Ravi Shastri was out caught behind  for two. 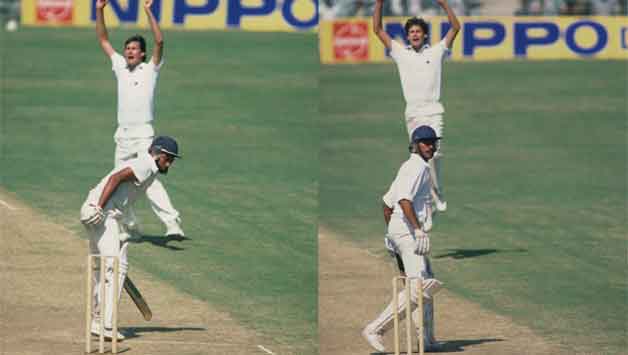 Foster registered his best bowling figures — six for 104 —and was instrumental in bowling out India for only 272. England batted India out of the Test match scoring 652 courtesy of twin double hundreds — Graeme Fowler (201) and Mike Gatting (207).

In the second innings, Foster accounted for Indian top-order yet again. The feature of Foster’s bowling was his high-arm action and the late swing. Gavaskar (2), Krishnamachari Srikkanth (16) and Dilip Vengsarkar (2) were dismissed within 22 runs — all three to Foster.  England bowled out India for 412, thus needing 33 runs to pull out a Houdini act. England won the match by nine wickets. Foster picked up five wickets in the second innings. His match haul of 11 for 163 was pivotal in dismantling India’s might at home.

In the subsequent Test matches, Foster failed to replicate his magic on the Indian soil. He was often on the sidelines because of the indifferent form.

In 1986, Foster took 106 wickets for Essex and was part of the tour party to Australia. He did not play a single Test. Foster was adamant to perform well whenever he got another England cap. “I decided at the start of the 1987 series against Pakistan that if I got into the England team, I would simply try to produce my county form. In my early Tests I always felt on trial, and as a result tended to try to bowl defensively. Whereas with Essex I had always been regarded as an attacking bowler,” said Foster to Wisden.

At Leeds, Foster picked up eight for 107 against Pakistan. It was a solo act from him since England lost that game by an innings.  Foster played every game that summer and his bowling became far more incisive compared to the previous years.

In 1987, he took 86 wickets for Essex amidst their dwindling fortunes. Foster assumed the role of the England strike bowler when the team went to India for the fourth edition of the cricket World Cup.

In 1989, Foster was part of rebel tour to South Africa under Mike Gatting. All the rebel players were banned for three years from Test cricket.

In 1993, Foster made his final appearance in Test cricket when he replaced Philip DeFreitas in the second Ashes Test at the place where it all started for him- at Lord’s. Australia annihilated England batting them out of the Test match after scoring 632 for four in the first innings. Foster failed to pick up any wicket.

A week later, Foster announced his retirement since he encountered yet another injury. Foster was only 31 when he retired.

Foster is now a qualified physiotherapist — an interest he developed whilst his career was ruled by the injuries. Such is the irony of life.