Neil McKenzie caught with his pants down!

Neil McKenzie caught with his pants down!

The incident happened in the third and final One-Day International when South Africa toured Australia in 2000.

The term “caught with the pants down” is a situation that embarrasses the person found in such a position. Neil McKenzie found himself in that position figuratively and literally.

The incident happened in the third and final One-Day International when South Africa toured Australia in 2000. South Africa had won the toss and chose to bat first and scored a paltry 206. Australia lost early wickets in their chase. But the innings was held together by Adam Gilchrist and Michael Bevan.

The embarrassing moment took place in the 36th over with Roger Telemachus bowling to Michael Bevan. Telemachus bowled short and Bevan pulled it over the mid-wicket. McKenzie, fielding at deep-square leg, came running to stop the ball from touching the boundary ropes. In saving the boundary, McKenzie dived full stretch. In the process he ended with his pants down! To add to more embarrassment, the South African’s dive went in vain as the ball went over the ropes.

The embarrassed fielder got up quickly and pulled his pants to save further blushes. The humorous incident couldn’t stop skipper Shaun Pollock from having a hearty laugh. McKenzie, however, had the satisfaction of finishing on the winning side as South Africa won the match by eight runs to level the series 1-1. 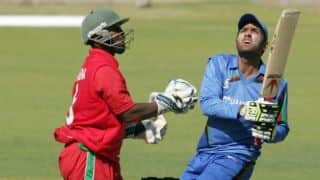