Nepal qualified for the ICC World T20 2014 recently and it is a huge moment for the Himalayan Nation. Nishad Pai Vaidya writes why the qualification into the big league itself is a big victory for the people of Nepal.

Nepal qualified for the ICC World T20 2014 recently and it is a huge moment for the Himalayan Nation. Nishad Pai Vaidya writes why the qualification into the big league itself is a big victory for the people of Nepal.

The Himalayan nation is set to breeze into the cricketing world. A country more famous for its scenic beauty and traditions now has another reason for pride — Nepal have qualified for the ICC World T20 2014 after going through the rounds at the ongoing Qualifiers in Dubai. This is a huge leap for a side that has been battling in the lower leagues for years and is great news for their enthusiastic supporters who turn up in numbers during their home games at Kathmandu.

The people of Nepal have shown great passion for the game. Pictures of packed house were beamed across the world when Nepal hosted the Asian Cricket Council (ACC) Twenty20 Cup this year. For an Associate Nation, it was a heartening sight. The general impression in the cricket world about such nations was that cricket was only a sport that would be played by the miniscule minority and followed by their well-wishers. The likes of Netherlands, Scotland etc. have been around for a while, but the enthusiasm in Nepal was reminiscent of some of the more frontline cricketing powers. Here you had a great crowd for a game between two lesser sides’; people turning up in numbers to support their team. That is passion!

Perhaps, that is what keeps the Nepal cricket team going. Yes, as any other side, they would put in the endless hours at training and would work hard on their skills. But, if you have a great support base that is what helps you tremendously. It automatically lifts your spirits and fuels the motivation levels. Of course, you may want to perform well for your team and yourself, but if you have a crowd behind you, you have a much larger commitment. It is to the people!

In some respects, Nepal’s story can be compared to Afghanistan. A group of men, who grew up in refugee camps, went on to chase their dreams and became symbols of hope for a war-torn nation. They too had to play not only for themselves, but to bring a smile to the faces of the people back home — who live in a country that is still picking up the pieces after decades of violence and war. And, security issues force them to play their ‘home’ games in the United Arab Emirates. That makes their task even tougher as they have to adopt a home for their cricketing ambitions; that too after they have returned to their country from the refugee camps.

Nepal may not have faced the same difficulties, but they certainly have braved the hurdles that came their way. The country too has gone through uncertain times in the last decade and cricket can be a huge unifying factor for the people. Paras Khadka, Nepal’s captain and star all-rounder, who has been brilliant during the ongoing qualifiers can become a sporting icon in the country; leading the way for future cricketing generations.

So, when they fly to Bangladesh for the ICC World T20 2014, a nation may come to a standstill. People will collect around television sets in Kathmandu and other cities in the country. For the players, it is a big opportunity as they would rub shoulders with some of their heroes from the big league. It is a dream come true for a group of 15 and more importantly for a country. 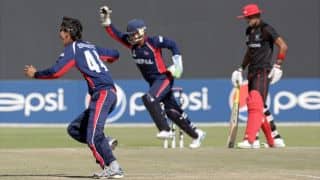 Nepal swell with pride after qualifying for ICC World T20 2014 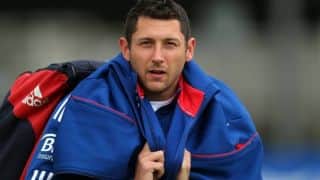