On the whole, the two primary flaws Team India needs to iron out before the eight-team tournament next year are one of the two opening slots and a middle-order slot.

In the later half of 2012 and early 2013, Team India played a few bilateral One-Day International (ODI) series just the way they do each year. There was nothing special or different about those games as such, but the national selectors followed them with particular interest. The reason was simple. Those games were a part of the build-up to the ICC Champions Trophy 2013 to be played in England. India played Sri Lanka in Sri Lanka, July-August 2012, Pakistan at home in December-January 2012 and finally England, again at home, in January 2013 before the premier ICC tournament. There were a few spots up for the grabs and selectors were looking precisely to fill them.

When the squad for the ICC Champions Trophy was finally announced, there were a few major changes. Opener Gautam Gambhir was dropped, so was middle-order mainstay Yuvraj Singh and newbies Ajinkya Rahane and Cheteshwar Pujara. In came Shikhar Dhawan, Dinesh Karthik and Murali Vijay. In the bowling department, Umesh Yadav, Irfan Pathan and Vinay Kumar came in for Mohammed Shami and Ashoke Dinda. The tournament also gave India a new opening pair in Rohit Sharma and Dhawan. After the major overhaul, the results were positive as India won the 2013 edition, which was also supposed to be the last.

But the tournament survived to see another day and in over seven months from now, will be played once again at the same venue England. Team India, the defending champions, once again find themselves in a similar situation. This time though, in the build-up to the tournament, they have less number of games to plug the gaps and get the combination right. The long home season that is underway, has 13 Tests at home, only has place for 8 ODIs 5 against New Zealand and 3 against England. We are through with one of them and the team has some concerns to address in those seven games.

When India last played the ICC Champions Trophy, their new opening pair of Dhawan and Rohit was a revelation. While Dhawan ended the tournament as the highest run-getter 363 runs in 5 games at 90.75 Rohit was not far behind, as he finished the tournament as the fourth-highest run-getter, being closely followed by Virat Kohli. However, as India prepares for the 2017 edition, the equations have changed drastically. Dhawan has been out with an injury and is unavailable for the first three games against New Zealand. Situation would not have been any different had he been fit, for his place in the side was already under scanner due to indifferent form.

His possible replacement KL Rahul, who hit an ODI hundred on debut earlier this year, too has been out with an injury for the next two games. India have fielded Rahane as the makeshift opener for the ongoing series. There is a general opinion that Rahane, who has opened in the past as well, does not enjoy skipper MS Dhoni s confidence. So, it will be interesting to see whether he is given a longer rope at the top of the order or sent back to the middle-order once Rahul is back.

Then there is Mandeep Singh, who too was used as an opener on the Zimbabwe tour. His presence in the squad for first three ODIs against New Zealand brings him into the mix. The squad will be revised after the third ODI and subject to fitness and availability; Rahul and Dhawan can be brought back into the squad. This leaves India with seven more ODIs to figure out who along with Rohit will open when India launch their ICC Champions Trophy title defence against traditional rivals Pakistan at Edgbaston, Birmingham, on June 4, 2017.

The middle-order looks more or less settled with Kohli firmly sitting at No. 3. Manish Pandey, who scored a match-winning unbeaten hundred against Australia in the final ODI at the beginning of this year and saved the team from the embarrassment of a whitewash, in all likelihood will play all the remaining games ahead of Champions Trophy. Skipper Dhoni himself will be a part of all these games, which leaves only one place to be filled before the all-rounders come in.

With an eye on that lone spot, Suresh Raina was brought back into the squad for the current series. However, he was ruled out of the first game after being down with flue. He is set to return for the second ODI at Delhi on October 18 and make a claim for the lone middle-order spot. Yuvraj Singh, who last played for India in the ICC World T20 2016 earlier this year, is also learnt to be in the thick of things. A stroke-filled hundred against Madhya Pradesh in the last Ranji Trophy encounter has only made his claim stronger. If a fitter, meaner and hungrier Yuvraj does return to the squad for the last two New Zealand ODIs, it will spice up the competition for the middle-order berth.

For now, Kedar Jadhav, who has done well in limited opportunities he has got thus far, Rahane and Mandeep stay in the hunt to compete with Raina, who is the frontrunner. If he does reasonably well in the coming games, there should be no stopping him, given he enjoys skipper s faith and adds value to the team with his all-round abilities.

For the remaining slots, players virtually pick themselves. All-rounder Ravindra Jadeja, ace spinner Ravichandran Ashwin, pacers Bhuvneshwar Kumar and Shami will all return to the squad. Hardik Pandya s Man-of-the-Match effort on ODI debut has made the competition for all-rounder s slot healthy. In England, where the conditions generally tend to favour seam and swing, he may get a look in ahead of Jadeja. The spin cupboard is not bare either, with Akshar Patel and Amit Mishra providing back-up to Ashwin and Jadeja.

In the pace department too the players pick themselves. As mentioned, apart from Bhuvneshwar and Shami, Jasprit Bumrah is a certainty for the Champions Trophy, unless of course if the trio is injured. The likes of Umesh, Dhawal Kulkarni and Barinder Sran can be decent replacements in such a situation.

On the whole, the two primary flaws Team India needs to iron out before the eight-team tournament next year are one of the two opening slots and a middle-order slot. Given Dhoni s affinity for giving a longer rope to an individual at a certain position before making his mind, he is likely to play more-or-less the same XI in the remaining seven games before the Champions Trophy so that the players get a clear idea about their roles in the side and the team has a settled starting XI. 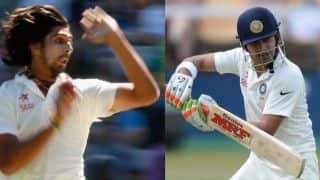 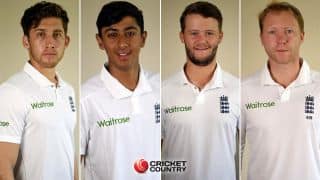 Zafar Ansari, Haseeb Hameed, Ben Duckett and Gareth Batty: A look at the four ‘new’ faces from England ahead of Bangladesh Tests