Brendon McCullum’s absence can only be filled if other batsmen make their individual contribution and not shove the burden entirely on Williamson.

With Brendon McCullum bowed out of international cricket, there in unmissable gaping hole in New Zealand’s batting line-up. McCullum, Kane Williamson and Ross Taylor (when in form) have been the primary sources of scoring runs for New Zealand, especially in Tests and One-Day Internationals (ODIs). It is high time when New Zealand openers Tom Latham and Martin Guptill step up to lead the batting. A good start is an essential part that influences an innings to a positive direction and this exactly is missing in the New Zealand side at the moment with both Latham and Guptill having averaged poorly against Australia this summer. McCullum’s absence can only be filled if other batsmen make their individual contribution and not shove the burden entirely on Williamson. FULL  CRICKET SCORECARD: New Zealand vs Australia, 2nd Test at Christchurch

New Zealand have faced Australia twice this summer. They toured their neighbours in November 2015 for a three-Test series. Australia triumphed 2-0. That was not surprising: while they did not depend upon a particular batsman to do the job single-handedly, New Zealand’s innings revolved around Kane Williamson. The visitors managed to draw the second Test at Perth because Williamson found support in Ross Taylor who made a crucial contribution with a fantastic double-ton, his career’s second. Australia had shielded that match in the every first innings when David Warner smashed his double century along with Usman Khawaja’s second Test ton. Had the Black Caps once again failed Williamson, the Test surely would have gone Australia’s way.

It was just an example that demonstrated Williamson needs the support to carry the team forward, which McCullum have left with him. With Taylor being out with injuries now and then, Guptill and Latham are the players who must escalate their numbers in the upcoming matches. While Guptill has averaged 20.25 in the ongoing home series against Australia, Latham was also close to poor numbers averaging 28. Guptill’s highest score in this two-match Test series has been 45, his other scores being 18, 18 and 0. On the other hand, Latham scored 6, 63, 4 and 39. READ: Brendon McCullum signs off in style, but New Zealand’s woes increasing

Any side surely needs better numbers from their top two batsmen. It will reduce pressure from the next batsmen on the line-up, who then can play their original game freely. Unlike Australia, the middle- and lower-orders of New Zealand that consists of the likes of Henry Nicholls and Corey Anderson have not made their mark in the whites yet so Black Caps desperately want their opening batsmen to deliver. When Shikhar Dhawan or Murali Vijay fail for India, Virat Kohli and Ajinkya Rahane invariably step up to the occasion to control the innings and bring it back on track. READ: Brendon McCullum Test retirement: Best knocks of the New Zealand skipper

The failures of Guptill and Latham in whites is one of the major reasons New Zealand has not been able to rise in the Test rankings despite being a decent side. They were unbeaten at home in the last four years before Australia defeated them in the opening match of the ongoing two-Test series at Wellington. However, that unbeaten streak was mainly because of some outstanding bowling from Trent Boult and Tim Southee, along with McCullum and Williamson’s fight without a lot of others chipping in. In order to carry the legacy of McCullum, who lost only one Test as skipper at home with the final match still underway, Williamson will want his openers to bring in their consistency. 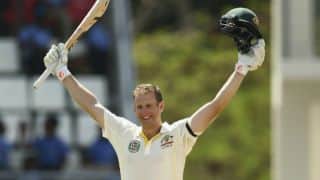