New Zealand tour of West Indies 2014: Kiwis have right blend of youth and experience to succeed

New Zealand tour of West Indies 2014: Kiwis have right blend of youth and experience to succeed

New Zealand will be looking to win only their second Test series away against West Indies.

New Zealand will play their first Test match against the West Indies at Kingston, Jamaica on June 8 2014. Bharath Ramaraj analyses the squad selected to win only their second-ever Test series in the Caribbean.

By the end of the year 2012, when New Zealand was browbeaten by South Africa in a Test series, there were question marks raised over their five-day status. However, under the able leadership of Brendon McCullum, New Zealand have transformed themselves from the wallows of mediocrity into a fighting unit. At home, they beat both the West Indies and India. Now, New Zealand’s foot soldiers have embarked on a journey to the Caribbean Islands, as they look to win a Test series against the West Indies in their own patch, only for the second time.

If we have a sneak peek into New Zealand’s squad, they have a good mix of youth and experience in their ranks. Peter Fulton, Tom Latham and Hamish Rutherford are the three options for the opening slot. In their warm-up game against Jamaica select XI though, Fulton did bat down the order. All three batsmen have had their issues with footwork. However, Rutherford is the one player who has the ability to play eye-catching strokes. It would be interesting to see Rutherford opening the batting with Latham. In the early 1990s, Ken Rutherford [Hamish’s father] and Rod Latham [Tod’s father] were teammates, while playing for New Zealand.

Kane Williamson, Ross Taylor and McCullum form a fine middle-order. Williamson has the technique and the temperament to succeed in Tests. The experienced duo of Taylor and McCullum are fine stroke-makers in their own right. Taylor was in stupendous form against the West Indies. On the other end of the spectrum, McCullum touched celestial heights in terms of batsmanship against India. To throw in a word of caution here, both stroke-makers have to make slight adjustments to their games to do well on rather sluggish tracks of the Caribbean.

Corey Anderson and Jimmy Neesham are the all-rounders in the setup. Neesham made a hundred on his debut against India at Basin Reserve, Wellington. But Anderson, known for his power-hitting most likely would play the first Test ahead of Neesham. He can also bowl left-arm medium-pace. Luke Ronchi and BJ Watling are the two wicketkeepers in the squad. Watling bats with a calm head on his shoulders and arguably is one of the better wicketkeepers going around.

Trent Boult, Tim Southee and Neil Wagner are the frontline pacers. Boult makes good judges of the game blink their eyes in delight with his profusion of virtuosity to swing the ball late. He has the required skills to become a sparkling treasured star of the game and the best swing bowler going around. To make it even better for him, Boult is a left-arm quick. Southee too can make the batsmen dance to his tunes with swing. He also has a fine surprise bouncer up his sleeve. Neil Wagner puts his heart and sleeve into his bowling and can always be relied upon to bowl well with the old ball. New Zealand though, may lack the extra pace of Adam Milne, who is injured.

Ish Sodhi, the leg-spinner and Mark Craig, the off-spinner are the tweakers in the squad. Craig can also score useful runs down the order. This is an area where West Indies have an advantage. It has to be remembered that tracks in the West Indies including the one at Sabina Park, where the first Test will be played have slowed down. However, the weather conditions in June can still play a part. West Indies board also use Dukes ball these days and that means Boult and Southee can generate swing.

New Zealand performed exceptionally well at home in their last two series and now they will look to overcome the West Indies by defeating them in their own den. 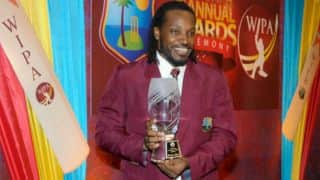 Chris Gayle felicitated by WICB ahead of 100th Test