Once again it wads New Zealand’s bowling attack that led them to cross the line in the match, like they did against India in their opener fixture at Nagpur.

New Zealand remained undefeated in ICC World T20 2016 with their eight-run victory over Australia at Dharamsala on Friday. Once again it wads New Zealand’s bowling attack that led them to cross the line in the match, like they did against India in their opener fixture at Nagpur. Mitchell McClenaghan who has returned to the Twenty20 Internationals (T20Is) after a gap of three years was the player of the match for his three wickets in four overs. Barring Australian openers, Mitchell Marsh and Glenn Maxwell, a total of five Australian batsmen were dismissed for a single digit which is an intense situation ahead of their matches against India, Bangladesh and Pakistan. There were numerous thrilling moments in the match, we list you the best four: FULL CRICKET SCORECARD: Australia vs New Zealand, ICC T20 World Cup 2016 Match 17, Dharamsala

New Zealand’s opening stand: Martin Guptill and Kane Williamson went off a flier, sharing a partnership of 61 runs off 7.1 overs for the first wicket. Guptill faced the first ball of the day, who hit two boundaries in the first over and managed nine runs off it. The most expensive over of the match was easily Ashton Agar’s first maiden World T20’s over. Guptill smashed three sixes to bag 18 runs off that over. Be it Nathan Coulter-Nile, Adam Zampa or James Faulkner, the duo dominated all. New Guptill’s knock of 39 off 27 was inclusive of four sixes and two fours, while Williamson had four boundaries to his name.

Usman Khawaja’s dismissal: Khawaja opened Australia’s innings along with Shane Watson with a target of 143 ahead of them. The way Khawaja got off to a start, Australia must have imagined finishing on the winning side on Friday. Corey Anderson bowled the first over who was hit for a four on his second ball. Adam Milne came next who too was smashed for a couple of those boundaries. Under pressure, Kane Williamson handed the ball to Grant Elliot. However, the result was the same; Khawaja was on fire. He shared a 44-run stand with Watson for the first wicket. The tables turned for Australia when David Warner got Khawaja run out in the 9th over, when Australia still needed around 80 runs more.

Steven Smith’s dismissal: Smith’s wicket cut down Australia’s hopes of winning by a great extent as Australia had already seen the likes of Smith, Warner, Watson and Khawaja back into the dugout by then. However, the way the Australian skipper was dismissed made it look miserable and that might have haunted him for the rest if the match. The cameraman again and again focussed on Smith who did look troubled and the stumping was surely the reason behind it. Mitchell Santner went outside off, Smith in reply came dancing down the pitch and was way ahead to return when missed the delivery. Luke Ronchi had an easy stumping to his name. READ: Mitchell McClenaghan, Santner help New Zealand defeat Australia by 8 runs in Super 10 stage, World T20 2016 at Dharamsala

Mitchell McClenaghan: The pacer had last played for New Zealand in 2013 in the T20Is, which is why Williamson had risked New Zealand’s fate by picking him ahead of a third spinner in Nathan McCullum. McClenaghan picked the wickets of Watson, Mitchell Marsh and Ashton Agar. Keeping in mind the amount of damage that could be done by the likes of Marsh and Watson, McClenaghan’s spell was one of the major reasons for New Zealand’s victory, that has kept the Black Caps right on the top of Group 2 with a way better run rate when compared to the other teams of that group. 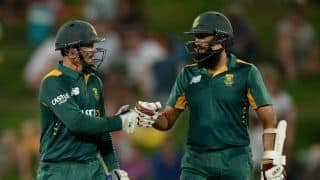