New Zealand finished on a total of 637 for eight at stumps on Day Three.

New Zealand finished on a total of 637 for eight at stumps on Day Three of the final test against Pakistan, gaining a massive lead of 286 in the process. With the innings not declared as yet, it is currently the third highest total by New Zealand of all time. Amit Banerjee takes a look some statistics surrounding the impeccable batting performance put up by the Kiwis to gain control of the match.

New Zealand have been in the driver’s seat for the last two days of the ongoing third and final Test at Sharjah. Trailing the series 0-1, they managed to finish on a score of 637 for eight at the end of Day Three, gaining a lead of 286, which allowed them a real chance to claw their way back into the series.

New Zealand managed to put up several individual records, including Brendon McCullum posting the fourth-fastest double-century of all time and registering most double-hundreds for New Zealand. They also surpassed their previous best total against Pakistan — 563 at Hamilton in 2003. Below is the list of highest innings totals by New Zealand against Pakistan:

* indicates that the match is still in progress

* indicates that the match is still in progress. Interestingly, all matches mentioned in the above table were drawn.

Brendon McCullum’s furious hitting for most part for the innings saw New Zealand send the ball over the boundary ropes 19 times to break the record for most sixes in an innings by a side, which was previously held by Australia (17). Following is the table that lists the most number of sixes per Test innings: 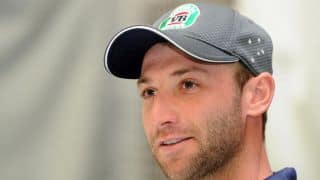