Bowlers grabbed wickets with comfort, batsmen eased towards personal milestones, and teams reversed roles at the Basin Reserve at Wellington.

New Zealand s lucky two: With Tim Southee making the ball swing both ways from one end, it was up to Neil Wagner and Colin de Grandhomme to provide some hit-the-deck stuff from the other. Wagner had his moments while bowling with a few balls zipping past the batsmen s helmet. JP Duminy and Hashim Amla, who looked well set in the middle after passing Southee s swinging spell, were undone by their own complacency.

Duminy, trying to whip through midwicket off Neil Wagner, mistimed the shot and gave a catch. Amla, too, had the same fate off de Grandhomme.

Jeetan Patel vs Quinton de Kock: A small preview in the last over before lunch set up an engaging battle between Patel and de Kock. Patel, on this tour, has dismissed de Kock four times. Patel, unafraid to use the flight, got smacked for boundaries in return, that also saw de Kock survive on quite a few times. In between all the intensity, de Kock marched past his eighth half-century in 55 balls.

De Kock eventually fell for an 118-ball 91 to James Neesham.

Temba Bavuma s resolute knock: Bavuma, who struck a valiant fifty in the first Test, seemed down and out early in his innings. He struggled against the moving ball with Southee making the opposition dance to his tunes. As time progressed, he looked more settled and sorted when it came to stroke play. He reached his fifty in 88 balls sans any aggressive shot in his innings.

Past his fifty, Bavuma did show sparks of ferociousness. In a bid to pull the ball, Bavuma top-edged to James Neesham for 89. 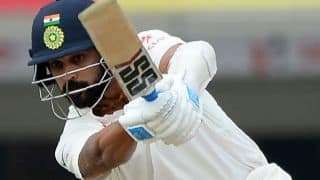 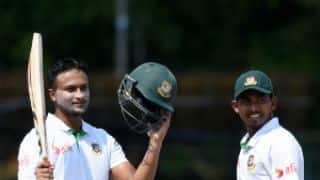