A gritty knock by Jeet Raval and glorious unbeaten century by Kane Williamson stole the show on Day Three of third and final Test in Hamilton.

A gritty knock by Jeet Raval and glorious unbeaten century by Kane Williamson stole the show on Day Three of third and final Test in Hamilton. It saw several records getting broken, frustration amongst the players, few milestones achieved and last-minute relief. However, New Zealand were on top and took the lead by 7 runs, responding to South Africa s first innings score of 314, despite rain playing hide and seek. Things did look one-sided until tea. But the final session left the game evenly poised and left something to look forward to for the next day. Let us have look at some of the moments that added spark to a rather long-stretched Day Three: Full Cricket Scorecard: New Zealand vs South Africa, 3rd Test at Hamilton

Kane Williamson s records galore: It might have been just another day at Hamilton with the rain playing peek-a-boo but Williamson ensured it turned out to be an exciting one. He played typical textbook shots and broke several records in the process. Williamson was just 60 runs away from his 5,000 Test runs. Playing his 110th innings, Williamson first got to his 26th Test fifty with couple of runs off Keshav Maharaj. He already had smashed 4 fours and a six then. This time he went for his second maximum and smashed Vernon Philander towards square leg, reaching 5,000 Test runs in style. He is the third youngest and fastest to get to this feat, 7 fewer than Martin Crowe s 117 innings and Ross Taylor s 120.

He did not stop there. Dean Elgar became the guinea pig and his four consecutive full-tosses paved the way for his 17th Test century, equalling the record held previously by Crowe. He might have not got the opportunity to celebrate instantly but his former captain, Brendon McCullum, ensured that the milestone was celebrated and raised a toast for the skipper s milestone on achieving the feat over social media.

Jeet Raval-Kane Williamson s stand out partnership: Raval s determination coupled with some masterful strokes from Williamson was just what New Zealand needed after Latham fell for 50. Raval went past his career-best score of 80 that he secured in the previous Test. He faced 254 deliveries and would have loved to get to his maiden century. Had he, it would have been another record for New Zealand as he would have been the first New Zealand opener to get this feat against South Africa since 1953.

Williamson on the other hand, called for the big shots. Both stitched a patient century-stand that frustrated the opponents. They also went past their previous highest second-wicket stand achieved at Dunedin in the series. The stand of 190 runs remains to be the top second wicket-stand against South Africa so far. Williamson s century helps New Zealand take lead vs South Africa on Day 3 of 3rd Test

Morne Morkel s milestone: Morkel who was back to the longest format after a year brought his experience into play. Morkel went around the wicket to trick Latham after the opener had slammed his 13th Test fifty. The delivery edged and Quinton de Kock showed his acrobatic skills behind the stumps despite an injured finger, diving towards the left to catch with one hand. Morkel got to his 250th Test wicket. Morkel was also the mastermind behind providing South Africa their biggest breakthrough.

He once again bowled round the wicket and a thick inside edge by Raval flew to de Kock behind the stumps who dived towards the left this time to grab the wicket with one hand.

Kagiso Rabada s last-minute relief: Rabada had his way during the first innings with the bat securing his highest Test score of 34 on Day Two. After bowling 18 overs, Rabada finally grabbed a wicket when the second new ball was introduced. He got his first for this match trapping Neil Broom right in front of the stumps in the final ball of his 19th over. Rabada was soon on a roll as he went for the second in the first ball of his next over. This time last Test s centurion Henry Nicholls was sent back to the pavilion for a golden duck with a bouncer. It hit off Nicholls glove and de Kock who showed no signs of injury, grabbed this wicket as well. Rabada was on a hat-trick, but was denied one as new batsman Mitchell Santner played cautiously on the next delivery. Pakistan vs West Indies 2016-17: Jason Holder says hosts must be prepared for new faces in the visitors side 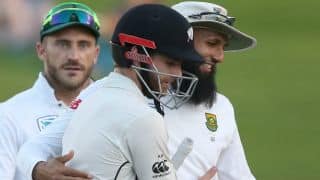