New Zealand will look to extend their unbeaten Test run on home soil as well as whitewash Sri Lanka 2-0.

New Zealand extended their formidable, unbeaten Test streak on home soil to 12 when they beat Sri Lanka by 122 runs in the first match of the two-Test series at the University Oval in Dunedin. With the second Test scheduled to begin on Friday, New Zealand will eagerly be anticipating the possibility of their second 2-0 whitewash over Sri Lanka on home soil, while the tourists will be achieve a satisfactory result in their last Test of the year, even though the odds are clearly stacked against them. Amit Banerjee predicts some of the contests that are likely to take place between players from either team in the following points. LIVE CRICKET SCORECARD: New Zealand vs Sri Lanka 2015-16, 2nd Test at Hamilton

1. Martin Guptill vs Nuwan Pradeep: Both Guptill and Pradeep were the key performers for New Zealand and Sri Lanka during the former’s first innings. Guptill batted with precision and ease as he ambled his way to a score of 156, which formed the backbone of New Zealand’s massive first innings score of 431. Pradeep, who is spearheading the Sri Lankan pace attack in the absence of the injured Dhammika Prasad, failed to provide Sri Lanka the early breakthrough that is expected from a strike bowler, and might want to make amends for it in the upcoming match. READ: Black Caps record comfortable 122-run victory over Sri Lanka in 1st Test

2. Tom Latham vs Suranga Lakmal: Lakmal, someone who does not find a place in the Sri Lankan Test side that often, did in the first innings what Pradeep could not achieve — get the early breakthrough. He managed to get rid of Latham before the latter could cause further damage, although its success was short-lived. Latham managed to produce a turnaround in the second innings as he went on to slam an unbeaten ton. Will be interesting to see who gets the better of whom in the upcoming game.

3. Angelo Mathews vs Neil Wagner: Wagner was not among the most talked-about players from the New Zealand camp before the series, and suddenly the cricket community is abuzz with discussions of the South African-born pacer. Wagner’s sudden claim to to fame is his consistent performances with the ball in both innings’ at Dunedin in general, and his dismissal of opposition skipper Mathews in particular. Mathews’s presence at the crease was crucial as was Dinesh Chandimal’s, if the visitors were to stave off defeat.

In came Wagner, who bowled a peach of a yorker along middle stump in the morning session. Mathews, expecting the ball to rise, was foxed by the length and did little to stop the ball from deflecting on to the middle stump from his front pad. The dismissal was a key turning point in the game as the Sri Lankan innings went south from that point onwards. The memory of it will be vivid in Mathews’ mind when he faces Wagner at Hamilton, and will look to make amends for it.

4. Dinesh Chandimal vs Mitchell Santner: Chandimal has been the most consistent batsman for the Lankans for the past one year in Tests, and the part-time wicketkeeper seemed to have carried his excellent form from the subcontinent over to the Trans-Tasman by scoring two half-centuries (83 and 58) in the match. He scored most of his runs off young Kiwi spinner Santner in the first innings, but was foxed by him in the second innings shortly after Mathews’ dismissal. Chandimal, who is also one of the better players of spin in the side, will look to keep his flow going in the second Test as well, and hopefully make a bigger impact on the match this time around.

5. Dimuth Karunaratne vs Tim Southee: One can describe Karunaratne as Sri Lanka’s first-choice wicketkeeper, even if the statement holds true only for the last few months or so. Amidst Sri Lanka’s struggle in finding an ideal opening combination, Karunaratne has been among the more consistent at the top, having scored 730 runs from 10 Tests this year at an average of 38, with two centuries and three fifties to his credit.

Karunaratne helped Sri Lanka recover from New Zealand’s early onslaught, which saw them get reduced to 29 for two, by stitching a 122-run partnership with Chandimal, who scored a patient 198-ball 84. Southee however, got rid of him before he could get to another big score in the match, aside from taking three wickets that match. A pitched battle between these two, given their current form, at the start of Sri Lanka’s innings is guaranteed. 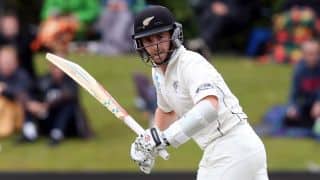