New Zealand need to bring their A game to overpower Australia in their backyard.

Coming off the back of a seven-series undefeated streak in Test cricket, New Zealand are expected to extend that run when they face off against a transitioning Australian side in their backyard. Brendon McCullum’s boys have responded marvelously to his instinctively aggressive brand of captaincy and all has gone well for the Black Caps over the past year or so. That said, the Australian team could spell an end to New Zealand’s joy ride in world cricket; Rishad D’Souza spells out why. LIVE SCORECARD: Australia vs New Zealand 2015 1st Test match in Brisbane

New Zealand are probably as good as they have ever been in Test cricket, if not better. McCullum’s style of leadership has blended well with the varied characters in the team and has enabled the team to reach unprecedented success. They have not only done brilliantly in the Test format but have extended their prowess in limited-overs cricket. That they reached the World Cup final for the first time in history in ICC Cricket World Cup 2015 is testimony to their rapid rise over the last couple of years.

New Zealand have a well-balanced unit with adequate ability in every department. Trent Boult and Tim Southee form the fulcrum of a slow-poisoning, if not instantly lethal, bowling attack. Kane Williamson and Ross Taylor give a dependable presence in a batting order flowing with ebullience and vibrancy. As far as fielding is concerned, is is easier to pick out fielders who are not exceptional than the contrary. ALSO READ: David Warner’s return is significant for Australia ahead of New Zealand Test series

As far as Australia are concerned there is a core of good players who have been around in international cricket for long enough to know the tricks of the trade. Skipper Steven Smith, his deputy David Warner, Mitchell Johnson, and Mitchell Starc form the steady base of a team in mega-transition. The exodus of senior pros following The Ashes 2015 has left the team with a lot of new, internationally unidentified faces.

Yet this Australian team, especially playing at home, has the ammunition to overpower any opposition including their trans-tasman rivals. The members of the Australian team that survived the exodus to play another series need no introduction.

Johnson made a name for himself when he tore the Englishmen apart in the 2013-14 Australian leg of The Ashes series and followed it up with an equally devastating tour of South Africa, which helped his side to a historic 2-1 victory. Warner has evolved leaps and bounds as a batsman and in the ranking is always hovering in the top 10, as is his skipper Smith. Starc still has to prove himself in the Test format, but it evident that he is on the verge of delivering that proof.

New Zealand’s problems are compounded by the fact that they last played in Australia about four years ago — though they pulled off a famous victory at Hobart — and have little overall understanding of the manner in which the pitches behave in Australia. Their half-way abandoned game at Blacktown, owing to a rapidly deteriorating surface, adds to worries that they are under-prepared for the Aussie onslaught in these conditions.

There is no doubt that this is the best Kiwi side to take field in Australia in over three decades and it is also true that Australia are a young side low on reserves of international experience in their ranks. Yet the unique hostilities of the Australian conditions could just prove to be an undermining factor for the rampant Kiwis. This New Zealand side has shown in the past that rising above big challenges is their way. This series will likely be their greatest challenge in a long time and New Zealand have to persevere harder if they are to make history. 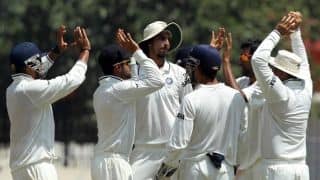 India, South Africa not worried about pitch ahead of 1st Test at Mohali