0 India-Sri Lanka matches without MS Dhoni till now. Dhoni has played all 14, though he tailed by Rohit (13).

3 India-Sri Lanka matches as captain for both Chandimal and Rohit. One more matches will take them to the joint-second slot, after Dhoni (10).

1 wicket needed by Thisara Perera (49) to reach the 50-wicket mark in T20Is. He will become the 4th Sri Lankan (after Lasith Malinga, Ajantha Mendis, and Nuwan Kulasekara) and 22nd overall to the landmark. However, 6 of Thisara s wickets have come for ICC World XI.

6 runs needed by Rohit (278) to become the leading run-scorer in India-Sri Lanka T20Is. Rohit is currently behind only Kohli (283). In the current Sri Lankan squad, Kusal Perera has most, a relatively lower 105.

3 wickets needed by Yuzvendra Chahal (11) to become the leading run-scorer in India-Sri Lanka T20Is. Chahal is currently behind only Ravichandran Ashwin (13). In the current Sri Lankan squad, Dushmantha Chameera and Thisara (8 each) have the most.

2 uncapped people in the Indian camp Deepak Hooda and Vijay Shankar. One of them may become the 74th Indian to play T20Is. 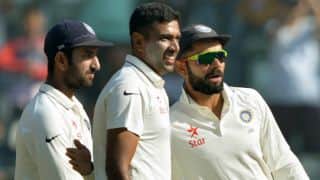 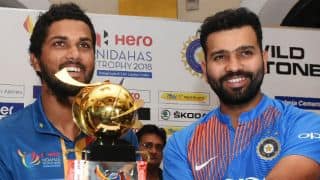