Bangladesh have lost all their 6 T20Is against India. They have a poorer record against New Zealand, against whom they have lost all 7 T20Is.

6 T20 Internationals for India against Bangladesh now. They have won all 6. In fact, Bangladesh are the only team against whom India have played more than 2 matches and still have a 100% win record (they have won 2 out of 2 against Afghanistan). Bangladesh, on the other hand, have played New Zealand 7 times and have lost all 7. One more defeat against India will help them level their performance against New Zealand. The world record lies with Pakistan, who have a 9-0 head-to-head with Zimbabwe.

2 captains for India against Bangladesh now, Rohit Sharma being the 2nd. MS Dhoni had led India in all 5 previous India-Bangladesh encounters. Bangladesh, on the other hand, have used 4 captains for 6 T20Is Mohammad Ashraful, Mushfiqur Rahim, Mashrafe Mortaza, and now Mahmudullah.

1/25 best figures for Shardul Thakur, in his 4th T20I. His previous best was 1/31, against South Africa at Centurion in February.

2 wickets for Vijay Shankar now, in his 2nd T20I. He had gone wicketless on debut, against Sri Lanka on the same venue 2 days ago. He also won his 1st Man of the Match award.

2 fifties for Shikhar Dhawan against Bangladesh now, the joint-most, along with Rohit. Virat Kohli and Gautam Gambhir have a fifty apiece. No Bangladeshi has scored a T20I fifty against India. 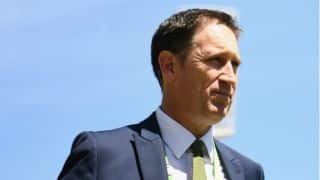 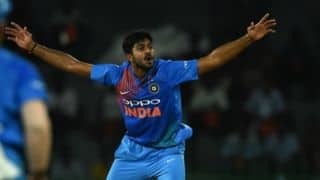