A mercurial Australian side has had a mixed run in the Ashes so far. Although the bowlers have delivered, what has cost them dearly is their vulnerable middle-order.

A mercurial Australian side has had a mixed run in the Ashes so far. Although the bowlers have delivered, what has cost them dearly is their vulnerable middle-order. They’ve banked heavily on their top three batsmen to bail them out in the series and upon their failure to do so, the rest have fallen like nine pins. Suraj Choudhari highlights Australia’s over-reliance on Chris Rogers, David Warner and Steven Smith.

Before the commencement of the Ashes, one could crystal gaze and see Australia romping home with the Urn. But England have turned the tables to take a 2-1 lead in the series. The onus is on Australia to win the fourth Test at Nottingham and keep their hopes alive.

After victory in the Lord’s Test, Australia incomprehensibly lost the plot at Edgbaston. While it was a collective batting failure, it brought to light the lop-sidedness in the batting department. The Lord’s victory put things in perspective.  Australia won by 405-runs, a match which was heavily dominated by the top three in the order — Rogers, Smith and Warner in both innings. They scored runs aplenty and posted mammoth totals on the board. But their failure immediately exposed Australia’s brittleness in the middle. Thus far in the series, the troika of Rogers, Smith and Warner have scored 1008 runs at an average of 59.3 per innings, whereas batsmen batting from No 4 four to No 6 have accounted for a mere 261 runs at an atrocious average of 17.4 per innings. Apart from Peter Neville’s gutsy 45 and 59 at Edgbaston, Australia’s middle-order has had nothing to write home about. Numbers don’t lie, Australia have a problem.

Michael Clarke’s form has been questionable. His parched run simply refuses to abate. Adam Voges had a fantastic domestic season, but is yet to translate that into anything noteworthy at the international level. The century in West Indies counts for very little when pitted against consistent failures in the Ashes. Mitchell Marsh was brought in as a replacement for Shane Watson in the Lord’s Test, but is still to prove his credentials with the bat in the series. Marsh was expected to replicate somebody like Andrew Symonds or even Adam Gilchrist, but it seems like a distant dream at this stage.

If Australia is indeed desperate to retain the Urn, the Nottingham Test presents an ideal opportunity for their middle-order to make amends. The fourth Test will be an inspection of their spirit and a comeback is on the cards if the gravity and the urgency of the situation can galvanise them into playing the kind of cricket we witnessed during the ICC World Cup 2015. One should also remember, Australia recuperated quickly after a disappointing defeat in Cardiff, to create history at Lord’s and an identical resurgence cannot be ruled out at Trent Bridge.

Sreesanth: Putting hard yards on the field to ‘being human’ off it 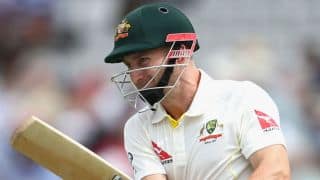