Michael Angelow was not the first streaker to take field during a Test. In fact, he was not even the second.

On August 5, 1975, a former Navy cook named Michael Angelow ran across Lord s during an Ashes Test with nothing on. It was the first instance of streaking in a cricket match in England and remains the most famous. It is commonly believed that Angelow was also the first streaker on a cricket field.

But Michael Angelow was not the first streaker to take field during a Test. In fact, he was not even the second. The first incident took place over a year back in Auckland, almost the exact antipode of St John s Wood. There was an encore the day after, perhaps by the same person; or perhaps not.

Australia and New Zealand did not play each other for nearly three decades after their first meeting in 1945-46. In 1973-74, they played two three-Test series, one in each country. The Australian leg went the expected way, Australia winning a Test by an innings on either side of a rain-aided draw.

The matches in New Zealand went a different way. The first Test at Wellington ended in a draw with the Chappell brothers scoring 646 runs between them. A five-wicket win for New Zealand (their first against Australia) at Christchurch meant that Australia had to win the final Test to save the series.

The pitch for the third Test at Auckland was overwatered. Bounce was uneven at one end and batting became a lottery. Australia were all out for 221 on the first day, March 22, 1974. Before the close, New Zealand lost 8 wickets for 85. Among this ruins, Doug Walters scored one of his finest hundreds, while destroying the bowling of a young Richard Hadlee.

It was during the New Zealand innings, half an hour before the close, that the first streaker made his appearance. Described as a dark-haired young man , he ran from near the sightscreen, through mid-wicket and disappeared between the stands near the square-leg boundary. It all happened very quickly before the police or anyone else could react. That probably accounts for the differences in the descriptions of what he was wearing. He may have been wearing a flesh-coloured t-shirt or nothing at all.

As the match progressed to the evening on the second day, Australia built up a big lead in their second innings. The wicket was still difficult. Ian Redpath was the only batsman to cross fifty but he carried his bat for 159.

In the evening while facing the second new ball, Redpath had another distraction to negotiate. This was another athletic young man who raced across the ground on the leg-side. Everyone seemed better prepared this time. Television cameras caught him. The police chased him as he went off the field. The streaker raced into an area where the men s restrooms were located. The police found that the place was populated by some twenty people, none of whom answered to the description of the streaker. It appeared that he had an accomplice who provided him with his dress before the police could get there!

Considering the coverage, it seems odd that there are differing opinions about his attire. He was probably in the nude but he could have been wearing a brief.

That is all that reports suggest. What they do not suggest, however, is whether the same man had made a repeat performance.

The third day and final day went without incident. New Zealand Herald remarked dryly that the match was for once streaker-less. Australia won by 297 runs to retain the series. It would be another eleven years before New Zealand won a series against Australia.

Australian grounds were infested with streakers in the following years. It increased to the extent that the newspapers talked about an instance where the same individual tried to run across MCG twice on the same day before he was stopped.

Coincidentally, the first streaking in English football happened on March 23, the day of the second incident in Auckland. Just before the start of the league match between Arsenal and Manchester City at Highbury, a middle aged man named John Taylor ran around the field before he was caught by three policemen. He was forcibly clad in trousers and marched out. The North London Court imposed a 10 fine on him the next day. But thanks to the events at Eden Park, cricket stayed ahead of football by around a day and a half in this innovation.

Sixteen-and-a-half months later, Michael Angelow ran across the green canvas of the Lord s. He deserves his fame an Ashes Test at the most famous ground, being spoken about by John Arlott and Trevor Bailey on Test Match Special, the subject of a famous photograph by Patrick Eagar. He also had an unforgettable name. Many have followed him over the next three decades till streaking in the cricket grounds became nearly extinct in the 2010s due to stricter access to the grounds and heavy fines.

It seems a bit unfair that the names of the pioneers of this lost art has not been recorded. Unless they come forward in their old age, it is likely that they are lost forever. 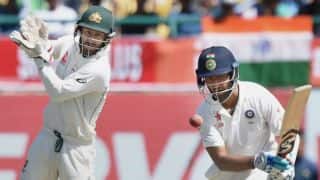