“No regrets; have cherished every second of it”, says Devendra Bundela on eve of becoming most-capped Ranji player

“No regrets; have cherished every second of it”, says Devendra Bundela on eve of becoming most-capped Ranj

Bundela, captain of Madhya Pradesh Ranji team and a stalwart of Indian domestic cricket, will etch his name in the record books on Tuesday when he becomes the most-capped player in the history of Ranji Trophy. We spoke to him on the eve of the historic match.

In cricket, like any other aspect of life, luck plays a huge role. Every cricketer who plays the game at First-Class level dreams of playing for his country, but only the most fortunate (or hungriest, depending on your point of view) realise their dreams. We have seen David Warner become the first Australian cricketer in 132 years to be selected for the national team without experience in First-Class cricket. With due respect to his talent, fortune played a huge role in it. Then we have seen Stephen Cook, who had to go through the grind of First-Class cricket for 16 years before making his international debut for South Africa. A late bloomer, he is lucky in his own ways. Ranji Trophy 2016-17 Points Table & team standings.

There are some others as well, for whom the progression from First-Class to international cricket is a natural, seamless process. And then there are the unlucky, who serve the game for long period but fail to get that slice of international cricket. Devendra Bundela, captain of Madhya Pradesh (MP) Ranji Trophy team and a stalwart of Indian domestic cricket, is one of these men. However, on Tuesday, November 29, he will etch his name in the record books when he will become the most-capped player in the history of Ranji Trophy, surpassing Amol Muzumdar s record of 136 matches. On this occasion, luck will not be able to deprive him of something he so richly deserves.

We caught up with him on this momentous occasion and the ever so humble cricketer happily obliged. The conversation started with the clich d question: How does it feel to achieve this feat? Bundela, currently in Dharamsala to lead MP against Baroda in the Ranji Trophy encounter, admitted that it obviously feels great before quickly adding it never occurred to him that so many years have passed: Pata hi nahi chala, kab itna time nikal gaya.. (I never realised that it has been so long) I just kept playing one season at a time. Time simply flies, doesn t it?

Time indeed does fly, and who would know that better than Bundela, who is playing the 21st season of his First-Class career. He has seen Indian cricket cricket in general evolve over the last two decades. A lot has changed over the years. Fitness levels have gone up. Awareness for fitness has gone up in general. Players have become a lot more professional. More fast bowlers are coming up. It was not the same when I had started, said Bundela.

When you talk about cricket in India, especially Test cricket, the focus invariably goes on the nature of pitches, what with people expecting a rank turner every time India plays a Test. But Bundela believes Indian cricket has come a long way from the traditional turners.

The nature of pitches has changed over the years. Unlike in the past, where we were mostly dished out slow turners for First-Class cricket, green-tops have started coming up in last 6-7 years. This has made batting challenging more than ever, he said, supporting the neutral venue-thing introduced this season in the same breath. The board has taken a good decision in implementing it. This way, the entire home advantage has been diluted. You have no control over what kind of conditions you get. Playing good becomes the only option. So yes, it is a good thing.

Despite never getting a chance to don the India colours, Bundela has continued to play the game with same passion and enthusiasm in last two decades, something which speaks volumes about his dedication and commitment towards the game. It is not easy to stay motivated for so long, especially when you know a national call-up may never arrive.

Ask Bundela what keeps him motivated, and he will say it is his hunger to contribute towards MP cricket. I took the captaincy of MP team in 2010. We were playing in the Plate Group back then. But we made it to the Elite Group the next year and have since then sustained that position. We have played good cricket to stay in the top 6-7 teams in India. We even made to the semi-final last year but missed out on winning it. The desire of winning the Ranji title for MP keeps me going, he said.

The India cap may have eluded him, but Bundela has achieved a few milestones in his journey. Becoming the most-capped Ranji player is one of his achievements. Besides, with 8,755 runs to his name, he is third on the list on highest run-scorers in the history of the premier tournament. Only Wasim Jaffer and Muzumdar have got more runs than him.

Ask him if he has any regrets, and you may expect not getting the India cap as his reply. But that is not what bothers him. In fact, not winning the Ranji Trophy title in 1998-99 is what he regrets the most: I scored over 1,000 runs (1,008 in 11 matches) that season. All that came to nothing when we lost to Karnataka in the final. I regret that loss till date. As far as not playing for India is concerned, it was never in my hands. I always gave my 100%; whether it was Ranji Trophy, Duleep Trophy or for India A. That is what satisfies me, and that is what I play this game for. Ironically, that same season also remains as his most cherished till date. MP won the Wills One-Day Trophy that year and did extremely well in that season. He even played for India A against Guyana A. He still holds those memories as most cherished ones from his career.

Most of Bundela s current teammates were school-going kids when he had started playing. Today the experienced pro is a mentor to them. Guiding the youngsters in the team, and creating more international cricketers from MP is his another major goal: We have good talent in our side. Naman [Ojha] and Ishwar [Pandey] have obviously been on the radar of Indian team for some time. But there are other talented players too, who are coming up. There s Rajat Patidar, Shubham Sharma et al. They all have done well when given chances. Then we have good bench strength too. I just want to support these youngsters, want to help them in all possible ways and make international players out of them.

And he indeed is doing the same. Ankit Sharma, the MP and Rising Pune Supergiants (RPSG) all-rounder, testifies that: Bundi-Bhai [Bundela] made me understand how I need to imbibe the virtue of patience at First-Class level as the batsmen here will make fewer mistakes and I will have to earn my wickets.

An unassuming person, Bundela took this opportunity to thank all those who have been a part of his journey to becoming the most-capped Ranji player. I want to thank my family, friends, well-wishers, teammates and of course Jagdale-Sahaab (MPCA President Sanjay Jagdale).

We could not have left him without that one parting question, which every follower of MP cricket has for him; will we see Bundela next season? Bundi-Bhaiya, as he his fondly known as amongst his teammates and juniors in domestic circuit, commented: I have not thought about it. I take it one game at a time. It is obviously something which is on my mind. But there are many factors. If MP cricket requires my services, you don t know. For now, I have a job at hand. I need to score in tomorrow s game and help my side win. That s all I care about at the moment. 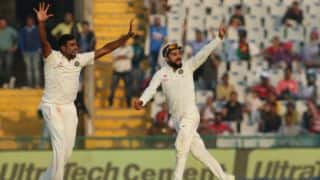