Indian fans have tasted 'revenge’ and many probably loved it as Australia crumbled improbably to a third successive defeat on a Mohali flatbed. If India manages to win at Delhi and register a whitewash, they can bask in its afterglow for less than a year… until it’s their turn to go around the world again! If India manages to win at Delhi and register a whitewash, they can bask in its afterglow for less than a year… until it’s their turn to go around the world again © PTI

Indian fans have tasted ‘revenge’ and many probably loved it as Australia crumbled improbably to a third successive defeat on a Mohali flatbed. If India manages to win at Delhi and register a whitewash, they can bask in its afterglow for less than a year… until it’s their turn to go around the world again!

The last time they did, in 2011-12, they had losses on the trot to show (South Africa can hardly wait).  It prompted this writer to note that India had never lost so badly abroad since the 60s. Well, then, this is also the worst loss for Australia in India in years and years.  Barring the 2004 series, Australia have rarely secured series wins in India, but rarely have they capitulated so meekly either.

In many ways, this series and the one India played in Australia in 2011-12 are mirror images of each other. At home, Australia looked formidable and seemed to have unearthed a battery of pace bowling stars.

Watching some of the ‘beauties’ they produced to hoodwink the Aussies, you could be forgiven for believing likewise about India’s spin trio. It was a starkly different picture outside their respective comfort zones. Indian batsmen struggled to handle sub-90 mph bouncers in Australia, while the mere threat of turn appeared to paralyse Phil Hughes & Co.

In producing strong home results, both teams have only regressed….back to a ‘sure-fire’ formula for home success that may not help win matches, let alone series, abroad. India did not depend so heavily on spin under Sourav Ganguly’s leadership and could realistically nurture aspirations of unprecedented success on tour. Australia have waited patiently for Shane Warne’s replacement since 2007, but their patience has yet to be rewarded. In the meantime, their batsmen, who once charged bravely out of the crease unlike their English counterparts, appear woefully out of touch when it comes to countering spin.

The greatest strength of Test cricket is the diversity of the conditions and playing styles.   Where limited-overs wickets can be relatively uniform in being prepared to aid big hitting, Test venues continue to reflect local conditions to at least some degree. Yet this diversity can be a double edged sword. It needs versatile, adaptable players to provide a thrilling experience in diverse conditions. If visiting teams routinely fall flat and make it far too easy for the hosts, bilateral Test series lose their meaning.

Unfortunately, only two teams seem to travel well abroad at the moment – England and South Africa. England are all round solid, with the odd flashes of brilliance, and are able to adapt to the conditions. South Africa have the best pace bowling attack in the world and simply negate the pitch element, running through batting line-ups any which way they can.

Other teams are lagging behind in one or more departments and are too inadequate to last the distance in a long Test series. Pakistan, like India, depend heavily on the guile of Saeed Ajmal to safeguard their new ‘home’ UAE, but lack a solid batting line-up to win abroad.   Sadly, Sri Lanka, New Zealand and West Indies appear vulnerable even at home .

It may well be a good idea for the International Cricket Council (ICC) and member boards to consider truncated Test series for sometime in the near future, instead of these four/five-match spreads. A well intentioned initiative to support Test cricket may lead to overkill if the opposing teams do not provide a worthwhile contest. And while cricket attempts damage control, the boards need to ponder over what’s gone wrong and groom complete, well-equipped cricketers rather than home tigers pump primed for the bloodbath abroad.

(Madan Mohan is a 27-year-old chartered accountant from Mumbai. The writing bug bit him when he was eight and to date, he has not been cured of it. He loves music, cricket, tennis and cinema and writing on cricket is like the icing on the cake.  He also writes a blog if he is not feeling too lazy athttp://rothrocks.wordpress.com/) 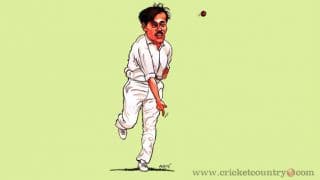