Owais Shah: A career defined by mixture of bad form and bad luck

Owais Shah: A career defined by mixture of bad form and bad luck

Owais Shah, born October 22, 1978, was an English batsman once hailed as the next Mark Ramprakash owing to his brilliance for Middlesex in First-Class cricket. It was a career that followed a similar path, for he failed to unveil his potential in the international circuit, albeit due to various things — some not in his control. Karthik Parimal looks back at the short outing of this able middle-order bat. 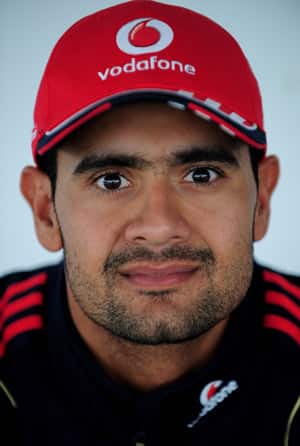 Owais Shah, born October 22, 1978, was an English batsman once hailed as the next Mark Ramprakash owing to his brilliance for Middlesex in First-Class cricket. It was a career that followed a similar path, for he failed to unveil his potential in the international circuit, albeit due to various things — some not in his control. Karthik Parimal looks back at the short outing of this able middle-order bat.

Very often, in England’s representative cricket, a prodigy is flagrantly compared with a stalwart. The list of upcoming players hailed as the next Ian Botham serves as a fine example. A torrent of all-rounders, at a raw juncture, are compared to one of the best in the circuit, and it is perhaps owing to this unwarranted pressure that many a young cricketer has fallen by the wayside. In Owais Shah’s formative years, his prowess, and impeccable strokeplay as a Middlesex batsman led to comparisons with Mark Ramprakash, but once he made the cut on international level, the selectors’ patience wore thin, quicker than usual. Was it because he failed to keep up with the mountain of expectations thrust upon what many believed to be able shoulders? We will never know.

It’s true that Shah seldom stamped his class on the few instances he was picked in the Test squad, but the powers that be, too, were responsible for not giving him a deserved rope. An impressive Test debut under trying circumstances was followed by a phone call from David Graveney, then chairman of the selectors, asking him to make way for Marcus Trescothick in the next fixture. No matter how coldly determined a sportsman is, a raw deal such as this is certain to suck hope. Shah was shelved for the next 18 months, and his dented morale allowed only for six Tests and 71 One-Day Internationals (ODIs) over a considerable span.

Shah’s was a career that yearned for highs, but was punctuated by frequent lows — not all of them his doing.

Born in Pakistan’s port city of Karachi, Shah’s first brush with cricket was on the streets, where a tennis ball, wrapped by tape on one side, was used as a substitute. Posters of Wasim Akram and Waqar Younis, Pakistan’s lethal opening bowlers, graced the walls of his house, but it was Javed Miandad’s and Viv Richards’s flamboyant approach with the willow that mesmerised the boy in his early teens. At the age of 15, he was back in England with his family, where his wristy elegance and nimble feet movement, much like his idols, against the spinners at the crease, in youth cricket, caught the attention of many. He quickly rose through the ranks and sped into First-Class cricket and England’s ‘A’ teams.

He was deemed worthy of captaining England for the Under 19’s World Cup in South Africa and the Colts’ Test match series at home against Pakistan, and both assignments ended on a triumphant note. He was picked for England’s ‘A’ side, this time for the tour of Australia, but his returns there were insipid. Thereafter, he descended down a slippery slope. From almost donning the English flannels, it was, understandably, disappointing for him to slip off the radar, for a good part of two seasons. Breakthrough on the big stage

Between 1998 and 2000, Shah could muster just 500 runs in First-Class cricket and was duly dropped by Middlesex. Once considered to be a permanent fixture in the county side, the axing came as a wake-up call and upon return to the domestic arena in 2001, he plundered 1040 runs — inclusive of three centuries and four fifties in 15 matches — at an average of 41.60. What impressed the head honchos was the brisk pace at which he accumulated those runs and, in the June of 2001, it earned him an One-Day International (ODI) game in English colours against Australia.

He thwacked a quickfire 24 in his first innings as an international cricketer, but it was his 62 in the next against Pakistan — during the course of which he shared a record fourth-wicket partnership for England (170 runs), alongside Trescothick — that propelled him to the fore. Both knocks were in vain and his next five innings yielded just 11 runs. With that came the first swing of axe, and although opportunities sporadically trickled in, frequently being left out of the cavalry and not having a fixed spot in the line-up took its toll on Shah. A three-year hiatus soon ensued.

For the next two seasons, he meandered in the lower levels, and resurgence seemed miles away. He was stripped off Middlesex captaincy, and this perhaps spurred him on to turn a corner in 2005 where, with a sudden burst of determination, he amassed 1,656 runs at an average of almost 70, topping the batting charts as the highest run-getter, in the First Division of the County Championship. He was instantly roped in for the tour of India with the England ‘A’ squad in 2003. During a fixture at Hyderabad, a meet with former Indian captain Mohammad Azharuddin, who tweaked Shah’s technique and taught him to flourish by playing side-on, bolstered his batting form. Soon, Shah became a probable for England’s upcoming tours of Pakistan and India.

Nonetheless, he was still on the fringes despite his purple patch, and speculation was rife that Duncan Fletcher, England’s coach at the time, didn’t rate Shah highly. He was in the squad for the tour of India and hardly looked like getting a game, but Alastair Cook was declared unfit on the morning of the Mumbai Test, and Shah was presented with his first Test cap. He notched scores of 88 and 38 and played his part in steering England to a series-levelling 212-run win, but a call from the selectors temporarily ended his hope of taking further part in the English flannels. “He [Graveney, one of the selectors] didn’t give me any reasons. I was gobsmacked [for being left out of the side]. I get 88 on Test debut and then I don’t get to play for 18 months. You tell me where is the sense in that?” he opened up to London Evening Standard.

Indeed, it took 18 months for Shah to script a comeback, but his figures were lacklustre. Yet again, he was dropped, and yet again he made his displeasure known by stating that it was unfair to expect him to be on top of his game after being made to wait for months between matches. The English, however, moved on. A change in coach didn’t help Shah’s fortunes much, either. He was given a run during the tour of West Indies in the summer of 2009, but a sequence of run outs pulled the final straw and the selectors scoured for other options thereafter. His only innings of prominence, a three-figure score was etched against the touring Indians at The Oval in the September of 2007, but that was in a losing cause, too.

Shah’s hopes of finding a permanent berth in the English line-up, at least in the game’s abridged version, were doused when, despite being an integral part of the ODI setup then, he was overlooked for the tour of South Africa in 2009-10. He found support from certain sects of the media. “Shah’s prime years as a batsman appear to have been sacrificed on the altar of the modern selectorial shibboleth of continuity. Admirable in conception, it has had the effect of making the England team a batting closed shop of which 1970s car union shop stewards can only have dreamed,” noted The Independent. However, curtains were drawn on his career, albeit the batsman turned just 31 at the time.

The final nail in Shah’s coffin was drilled when Middlesex let him go in 2010. Although Essex bagged him on a one-year deal almost immediately (which was further extended thrice by the same length), the episode left behind a sour taste. Nevertheless, devoid of any obligations, Shah turned a globetrotter with his Twenty-20 skills. Delhi Daredevils signed him for $275,000 during the second edition of the Indian Premier League (IPL), before he was transferred to Kolkata Knight Riders (KKR). In the fourth season, the now defunct Kochi Tuskers Kerala utilised his services for $200,000, but his best stint in the league was, undoubtedly, with the Rajasthan Royals. Replacing Shane Warne, he hammered 340 runs at an average of 38 and a strike-rate of almost 133 in IPL 5.

He was also a part of Dhaka Gladiators in the Bangladesh Premier League (BPL), as he steered them to noteworthy wins on a few occasions, before payment issues and personal reasons led him to quit the tournament midway. Back home, he was an asset to Essex, both in Friends Life t20 and County Championships, but in the September of 2013, he retired from First-Class cricket to pursue a career as a Twenty20 freelance around the world.

For a player of his calibre, it’s a pity he couldn’t contribute more on the big stage, especially considering the fact that he was on par with other batsmen who were given a long enough rope to prove their worth. Whether he flubbed whatever opportunities came his way, or whether the selectors could have handled him mindfully can be endlessly debated, but six Tests (269 runs at an average of 26.9) and 71 ODIs (1,834 runs at an average of 30.56) for a prodigy touted to scale many a peak is quite disappointing.