Pakistan bowl West Indies out for 53; register a famous win in 1986 Faisalabad Test

Pakistan bowl West Indies out for 53; register a famous win in 1986 Faisalabad Test

On October 29, 1986, a stunning batting collapse ensued. Chasing a moderate target of 240 for a win, West Indies were reduced to 43 for nine by Pakistan thanks to an inspired bowling performance by leg-spinner Abdul Qadir. Sarang Bhalerao revisits one of Pakistan’s thumping win over strong West Indies side in Faisalabad. 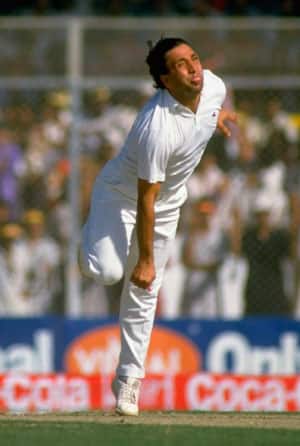 On October 29, 1986, a stunning batting collapse ensued. Chasing a moderate target of 240 for a win, West Indies were reduced to 43 for nine by Pakistan thanks to an inspired bowling performance by leg-spinner Abdul Qadir. Sarang Bhalerao revisits one of Pakistan’s thumping win over strong West Indies side in Faisalabad.

In the 1980s, West Indies were the team to beat. Their batsmen had the propensity to score heavily; bowlers bowled relentlessly often intimidating the batsmen, forcing them into submission. To their credit, West Indies’ pace quartet bowled Pakistan out for a paltry 159 in just 38.5 overs. Malcolm Marshall, Patrick Patterson and Tony Gray picked up nine wickets between them. This was after captain Imran Khan and Saleem Malik built a promising stand which had reached 53. Malik though, was hit on the arm just above the wrist and he retired hurt. Imran top-scored with 61.

West Indies took an 89-run lead in the first innings. The wrecker-in-chief for Pakistan was Akram who took six wickets. This was Akram’s best bowling figures at that time. Tauseef Ahmed, the off-spinner bowled unremitting line and length and tied down the West Indian batsmen. At the end of the second day, Pakistan lost opener Mohsin Khan and Ramiz Raza.

On the third day, Pakistan slowed down the pace and had survival in their mind. They scored only 155 runs on Day Three and lost Mohsin for 40 and Saleem Yousuf for 61. Wisden reports: “Pakistan with three days remaining, but they dug in on the third day, adding only 155 and, more important, losing only two more wickets. Salim Yousuf, having gone in as night-watchman, remained 46 overs for his 61, his maiden Test fifty, and both Mohsin and Miandad batted with great discipline, the latter eventually taking three hours over his 30.”

On Day Four it was Akram’s quickfire 66 was the striking feature of Pakistan’s innings. He joined skipper when Pakistan led only by 135 runs. Wisden writes: “They added 34, and then with sixes off Marshall and Patterson he added 38 with the plucky Tauseef. Finally, Pakistan’s courageous fight-back was epitomized by Salim Malik, who came out to bat with his arm in plaster, faced fourteen balls, and helped Akram add a further 32. West Indies, with four sessions remaining, needed 240 to win.”
The dramatic collapse

West Indies lost Desmond Haynes and Gordon Greenidge early, both dismissed leg-before. From there on, it was Qadir show. He bowled Larry Gomes for two. Skipper Viv Richards fell on the second ball for a duck. Dujon was out leg-before off Imran for a duck. Harper was dismissed for two by Qadir; No 3 batsman Richie Richardson, the eventual top-scorer fell for 14. Gray was hoodwinked by Qadir’s Houdini Act. At the end of the day, Courtney Walsh fell for a duck and West Indies were reeling at 43 for nine.

The next day, Qadir had Marshall caught and bowled thus finishing with bowling figures of six for 16. Wasim Akram was adjudged man-of-the-match for his all-round performance. West Indies’s total of 53 all-out is still the lowest total in Pakistan. Out of the 80 Tests played by West Indies in the ’80s, this was one of the eight losses they suffered.

Man of the Match: Wasim Akram