Pakistan bowlers have to think out of the box in slog overs: Rao Iftikhar Anjum

Pakistan bowlers have to think out of the box in slog overs: Rao Iftikhar Anjum

Rao Iftikhar Anjum urged the Pakistan bowlers to think out of the box during slog overs.

The term faithful “work horse” is one that springs to mind whenever the name Rao Iftikhar Anjum is mentioned. Widely regarded as a One-Day International (ODI) specialist, Rao Ifitikhar may not have been considered a part of the main Pakistan bowling attack, but his utility was never in doubt as he demonstrated his value to the team on numerous occasions by picking up wickets when least expected.

The 33-year-old fast bowler made his ODI debut against Zimbabwe in 2004 and last represented Pakistan in 2010 against Australia at Perth. He played 62 ODIs, where he took 77 wickets with best figures of 5/30. In an exclusive interview with PakPassion.net, Rao Iftikhar discussed the challenges faced by bowlers in the one-day game, offered advice to Pakistan’s bowlers in tackling opposition batsmen, assessed Pakistan’s chances in the ICC World Cup 2015 and spoke about the impact on the effectiveness of the Pakistan bowling attack because of the absence of Umar Gul.

The ICC has introduced new rules in ODI cricket which, on the face of it, are supposed to render the game fairer to all sides but the general consensus amongst the fast-bowling community is that the game is heavily tilted towards batsmen. Coupled with some smart innovations made by batsmen to counter bowlers, it seems the world is a less friendlier place for today’s ODI bowler. Rao Iftikhar says, “The recent rule changes particularly when it comes to field restrictions and the number of fielders allowed outside the circle have made it very difficult and uncomfortable for fast bowlers in one-day cricket and as a result many are struggling. Modern day batsmen have made some excellent innovations to batting and even a yorker — which was the go-to delivery for any pace bowler particularly during the death overs — is a delivery that can now go for runs.”

“Some of the shots that modern day batsmen are playing against quick bowlers are just amazing. Some batsmen have the ability and confidence to reverse-sweep pace bowlers and that is something that ten years ago you would not have seen at all. There was a time when you knew at the end of an innings where the batsman would try to hit you and you knew that yorkers and low full tosses were safe deliveries as a bowler, but these days any delivery it seems can be hit for a boundary with scoops, sweeps and other innovations” added Rao Iftikhar.

The recent failure of the bowling attack during the one-day series against Sri Lanka is a prime example of how Pakistan have struggled to come to terms against a determined and experienced batting lineup but Rao Ifitikhar believes that this is down to lack of “out of the box” thinking.

An oft heard criticism of Pakistani bowlers is centred around their inability to plan their attack against batsmen. At times, they have appeared devoid of ideas when bowling to even less experienced batsmen and this is an area which Rao Iftikhar feels can be improved upon with some careful planning stating that “I would urge the Pakistani pace bowlers to prepare better for the opposition batsmen’s strengths and weaknesses as at times I feel that there is a lack of planning from them. They need to be smarter than what they are as I feel they are being too predictable with their length and the field settings. From the field settings, opposition batsmen are quickly working out where the Pakistani pace bowlers are going to bowl and that is making life easier for the batsmen and tough for the bowlers. If you become predictable as a bowler then you are asking for trouble. You have no margin for error and therefore you cannot be predictable or the pressure just increases.”

With the eyes of the cricketing world firmly on ICC World Cup 2015 to be held in Australia and New Zealand, it is no surprise that Pakistan’s defeat at the hands of Sri Lanka has resulted in serious concerns regarding the team as serious contenders for the mega event. This is a concern shared by Rao Iftikhar, where he feels that the onus will be on Pakistan batting to provide the totals which the bowling attack should be able to defend with ease on pitches which should normally aid bowlers.

“I have no doubt though that our pace bowlers will be fine in Australia, but I worry about our batting line-up. The skill sets of the Pakistani pace bowlers will be ideal for conditions in Australia and New Zealand but our batsmen could have issues with the extra bounce. Our spinners will also be fine at the World Cup, but it’s just the batting that worries me and whether they can put the runs on the board for our bowlers to defend. Our batting as a unit is not up to the mark and unfortunately we rely upon individual performances instead of batting as a unit and building partnerships. The other problem with our batting is that we aren’t introducing any new faces to the line-up; it’s the same tried and tested players who we rotate.”

Fast bowler Gul’s steady decline in form due to fitness issues is a sad reality for Pakistan cricket. If fears that Gul may not be able to play in all three formats of the game turn out to be true, then his absence will cause a major impact on the development of younger bowlers in the team. This is a void that Rao Iftikhar feels will be difficult to fill as a guiding hand on the field is necessary to help bowlers — a role that the coach cannot fill during the course of the game.

“Umar Gul has been a fantastic servant for Pakistan cricket. Only he knows whether he is fit enough for all three formats and he is the person who should decide his fate. Gul’s bowling will be missed if he does stop playing Test cricket, but on top of that, his experience will be missed and his advice and guidance for the younger bowlers will also be sorely missed when he does call it a day in Tests. Pakistan’s pace bowling is inexperienced and lacks a figure-head, something that Gul has been for several years. A coach, even as experienced as Waqar Younis can only guide you but once you are on the field it’s down to you to perform and it’s your responsibility to ensure that all the advice and guidance you have received from the coach is put into action” stated Rao who is currently playing league cricket in Staffordshire, England. 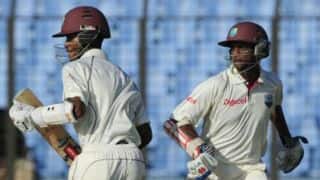