Pakistan's cricket whether in singularity of players or as a whole is seen as a mercurial entity.

In the past two years, England have owned the Nottinghamshire County Ground. In 2016, they smacked 444-3 against Pakistan. Then, in 2018, they hit Australia for 481-6 and almost scaled the 500-mount in ODI cricket. It was obvious why then, nobody gave Pakistan any semblance of a chance on Monday.

Thing is, you didn t really need to look at England s strengths for it. Pakistan have been down in the dumps for a while now, and that is putting it mildly. Losing all of their last 11 completed ODIs, this side was bereft of ideas and inspiration. Questions were asked about their desire to play and whether they even remembered how to win again. When would they win again?

It is staggering to think that West Indies didn t seem an inspiring enough opposition for them. How else to explain three batsmen getting out to the same shot, same manner? Why didn t it happen against England? To say they were playing against tougher opposition is an insult both to West Indies and Pakistan themselves. ALSO READ: Sarfaraz Ahmed credits batsmen as Pakistan beat England

No, Pakistan were being just Pakistan , albeit they stretch this statement too far this time around. Their cricket whether in singularity of players or as a whole is seen as a mercurial entity. They are as unpredictable as earthquakes in fact, they can either be similarly devastating, or pass by as mere whimpers, a non-starter of a tremor. West Indies experienced that latter bit. England were hit by a mega earthquake. ALSO WATCH: Mohammad Hafeez, Wahab Riaz lead Pakistan to 14-run win over England

From the very first ball, this seemed a changed side. Maybe, the entire Pakistan squad collectively got off the right side of their beds, as the saying goes. Or maybe, it was just the energy of the Pakistan fans, resplendent in green, proud and singing through the day. The previous embarrassment didn t matter while world cricket scratched their heads in astonishment, they believed, having seen many versions of this inconsistency. They knew, simply knew, that their team would come alive, sooner or later. ALSO READ: Catches win matches and other talking points

And they did as a team, nonetheless. Fakhar Zaman and Imam ul Haq batted with determination of Saeed Anwar. Babar Azam provided the manoeuvring touch of Mohammed Yousuf. Mohammad Hafeez drew out the panache of Younis Khan and Sarfraz Ahmed provided the finishing touches of Inzamam ul Haq. This was Pakistan of old, or at least it seemed like it. They rolled back years, perhaps for themselves, or for their fans. Maybe, they just rediscovered themselves.

It reflected in their bowling too. Wasim Akram: check. Waqar Younis: check. Saqlain Mushtaq: check. Even Shahid Afridi: check. Their hunting pack echoed past inspiration Shadab Khan started off with his leg breaks and broke the opening stand. Mohammad Amir belied all doubts about his form and fitness, and delivered an opening burst of control. Wahab Riaz proved expensive as he often does, but when it mattered most, he produced wickets three of them. Invoking the past is one thing though; delivering in the present, in such dire straits, is another.

Pakistan have always looked at their senior-most players to provide inspiration, and it came as no surprise that Hafeez and Shoaib Malik stood up to the occasion. 10 overs, 53 runs, 2 wickets it broke the back of England s middle-order, never mind that Joe Root tried his best to out-manoeuvre them spinners, or that Jos Buttler tried to hit everything in sight out of the park. On any other day, two hundreds would have been enough. Not on this day, not with Pakistan in such mood.

And that s the thing any other team would take such a loss very hard. Imagine South Africa, and whatever their plight after going down to Bangladesh on Sunday. But this English side is quite steely at least their captain is. Eoin Morgan spoke before the tournament how they will lose games, inevitably. It is the end-point that matters.

Nothing has changed to that end. They are still favourites still posses the best batting line-up in the tournament, their bowling is still iffy, and today s loss showed that they need to work harder on fielding.

Even so, Pakistan, in their unique volatile manner, have shown England to be vulnerable. 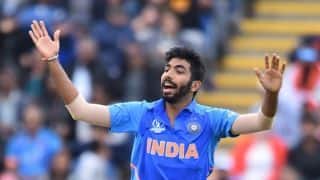 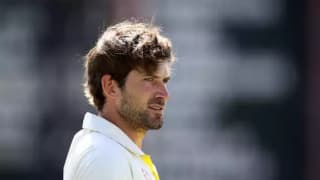