Mohsin Khan, Pakistan cricket coach, has attributed his team’s dramatic ascendancy – the team has won eight of the last 14 Tests and has lost just one – to the large-heartedness of the Board of Control for Cricket in India (BCCI) in banning Pakistani cricketers from playing in the IPL. 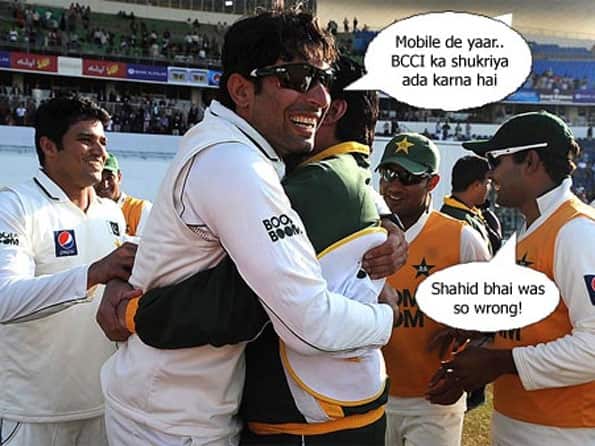 Mohsin Khan, Pakistan cricket coach, has attributed his team’s dramatic ascendancy – the team has won eight of the last 14 Tests and has lost just one – to the large-heartedness of the Board of Control for Cricket in India (BCCI) in banning Pakistani cricketers from playing in the IPL.

“Before I thank the Almighty, I would like to express heartfelt gratitude to the BCCI for its exemplary high-mindedness and foresight in shielding our boys from the baneful effects of the IPL,” said a teary-eyed Mohsin to reporters in Abu Dhabi after his team’s spectacular series-clinching victory over the No.1 Test team in the second Test.

“Just contrast our performances with the hemorrhaging of the Indians Down Under. Thank you, BCCI and the IPL Governing Council for your care for Pakistan cricket,” Mohsin added.

Misbah-ul-Haq also concurred with the coach’s assessment. “Initially I blamed my not being selected for last year’s IPL to my dour batting in the World Cup semi-final. In fact, it strained ties between the governments of the two countries. But I never realised it was part of a magnanimous plan on part of the BCCI to rejuvenate Pakistan cricket. Now I will convince Shahidbhai that Indians are also large-hearted,” averred Misbah, eyes welling with tears.

Zaka Ashraf, the Pakistan Cricket Board (PCB) chairman, maintains that all the credit cannot go to the BCCI alone. “With all the match-fixers in jail and no easy money coming in from IPL, the boys were resigned to the fact that they would have to try and actually win matches to earn some income,” Ashraf said. “But yeah, I also kinda agree that not playing silly IPL cricket could have been the biggest factor, and for that full marks to the BCCI.”

The Pakistan coach’s candid observations have ruffled feathers in the top echelons of the Indian Government. Ajay Maken, Union Minister of Sports, fumed: “The BCCI has to decide whose side it is on. I expect them to now ban Indians from playing in this year’s IPL and get in Pakistani players for the sake of Indian cricket.”

Sunil Gavaskar and Ravi Shastri clamped up when asked for their reactions.

“Look, our contracts with the BCCI preclude us from speaking our minds on what IPL has done to Indian cricket. Perhaps when we meet for drinks, I’ll tell you off the record,” said Gavaskar.

Shastri said he also would not venture any cliché on this touchy topic for the same reasons.

Some Indian cricketers have a different take though. “If Pakistanis think avoiding IPL has benefited them, I would like to show them the BMW I purchased after last year’s IPL.

Which weed are they smokin’, mate?” drawled Ishant Sharma, before signing off in style by showing The Unreal Times correspondent the middle finger!