Australia continued to keep Pakistan under the scanner on Day 3 of the first Test at Gabba.

Pakistan and Australia ended another enthralling day’s play at Gabba with visitors reeling behind. Resuming the day at 97 for 8, Pakistan had a humongous task of avoiding the follow-on and they folded for a paltry 142. Australia did not enforce the follow-on as they came to bat again. Steven Smith and Usman Khawaja continued their rich vein of form as Australia declared at 202 for 5. Chasing 490, Pakistan had a steep mountain to climb and see the day through without losing wickets in abundance. Visitors went to stumps at 70 for 2 and will have to bat out of their skin to save the opening Test. Here are some of the key moments that made the day more exciting:

Sarfraz Ahmed stands tall amidst Pakistan’s collapse: Pakistan gave a huge advantage to Australia after being reduced to 67 for 8 in final session of Day Two. Nonetheless, Mohammad Aamer stuck at oneend to give valuable support to Sarfraz who looked in control of proceedings on Day Three. Sarfraz came in at No. 7 with the score 57 for 5. He shuffled, disturbed the length of the bowlers, swept effectively to get a deserving fifty under his belt. He was his side’s lone warrior who looked at ease against a quality pace attack of Australia.

However, the wicketkeeper-batsman could not prevent his side fromavoiding the follow-on as he lost partners to remain unbeaten on 59. Pakistan werebundled out for 142 which set the tone for complete domination by the Aussies.

Early breakthroughs peg back hosts: Australia did not enforce the follow-on and came out to bat in the first session. They wanted to add more to their 287-run lead from the first innings and came out with an aggressive intent. However, hosts lost their in-form openers, David Warner and Matt Renshaw, in quick succession to leave the team to a poor start. Pakistani bowlers bowled in better lines with pace and bounce to get to the skin of the opponents as Australia went to the tea break at 40 for 2.

Smith, Khawaja and Peter Handscomb continue to make merry: The second session began with counter attack from Smith’s blade. Smith displayed his unrealistic form in the middle by timing the balls and finding the gaps on consistent basis. He was at his usual best as he shuffled, played to the field, came down the track against spinners, used his wrists effectively and pulled with great effect. Some of the shots from his willow exhibited the confidence he has in his abilities. Smith played it late against Yasir Shah whereas Khawaja exhibited a steady innings from his end. The left-hander started slowly but came to his groove after getting a look-in. Smith departed for 63 off just 70 balls but Khawaja carried on from his end to register his fifth half-century.

He was dismissed off a blinder taken by Misbah-ul-Haq at mid-on for 74. Rahat’swell directed bouncer was smacked at mid-on by the left-hander as Misbah held onto the catch by stretching to his left. Apart from the duo, Handscomb also piled up runs after bringing up his maiden ton in the first innings. He was comfortable from ball one and remained unbeaten on 35 as Australia declared at 202 for 5.

Visitors fight hard but lose two wickets at stumps: Pakistan had an uphill task to show some resistance in the fourth innings to draw the Test. Their openers, Sami Aslam and Azhar Ali, batted positively and did not seem bothered by the target in hand. They played showing the full face of the bat and tried to apply themselves in the middle. However, Sami departed after getting a start falling prey to Mitchell Starc in a similar fashion like the first innings. He edged one to the slips and made the long walk back to the hut for 15. Babar Azam held the sinking ship for a brief period with Azhar settling in but went for 14. Change in bowling worked wonders for Smith and co. as the youngster edged one to the first slip where Smith made no mistake.

Younis Khan (who is unbeaten on 0 in 19 balls) and Azhar are there in the middle but the job is far from done for their side. Thunderstorm is expected on Day Four but with only 8 wickets in hand, Australia have a chance to go 1-0 up in the three-Test series.

Crowd remained the highlight in an action-packed day: The day saw 9 dismissals, Smith and Khawaja’s entertaining knocks and Pakistan’s miseries but the crowd were the eventual winners in the end. Since Day One, the spectators have been turning up in large numbers to enjoy the proceedings, especially with a pool deck arranged in the stands, and Day Three was no less. There were plenty of youngsters who were seen valuing the longer format under lights which was pleasing to say the least. They erupted with every dismissal of the opposition camp and became a part of Australia’s success.

The Gabba crowd surely gives a sneak peek that Test cricket, especially day-night encounters, are here to stay and will not be discarded anytime soon.

(AdityaSahay is a journalist with CricketCountry who is completely into sports and loves writing about cricket in general. He can be followed on Twitter at adisahay7) 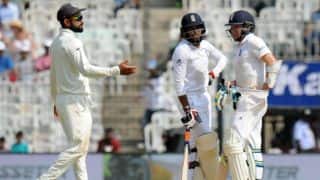