The series will be Australia's last overseas encounter before the World Cup.

The upcoming series between Pakistan and Australia in UAE would be an important occasion for the players to present a solid performance as an overseas victory for the team would boost the morale and confidence of the players as well as their chances of being selected for the World Cup to be held in their own backyard. Ayush Gupta looks into the important aspects of this series from the Aussies point of view.

With the ICC Cricket World Cup just months away, every match or series the teams play in the coming few months, is going to be crucial. The selectors of the teams will have a hard time monitoring the performances of players in both domestic and international circuits for the next few months in order to build a balanced squad. The series in question between Pakistan and Australia is also one of the most important tournaments at the moment.

The matches are not being played in Pakistan due to security reasons, due to which UAE has been serving as an ‘Away-Home-Ground’ for Pakistan for the past five years now. They have played a number of series on the tracks of Abu Dhabi, Dubai and Sharjah and are well habituated to those conditions. Pakistan can now claim these venues as their home-turfs after their notching a number of series wins at the said places.

Looking at the team, the only note-able absence from the squad is Saeed Ajmal, their star spinner, who was banned from bowling at the international level after being reported for suspect action and subsequently failing the test in Brisbane. However Pakistan has a squad of big-guns and highly talented players that could pose a grave threat and potentially upset the four-time World champions while playing on their home-turf.

Players like Misbah-ul-Haq, Ahmed Shehzad, explosive all-rounder Shahid Afridi, wicket-keeper-batsman Umar Akmal along with bowlers like Mohammad Hafeez, Mohammad Irfan and Wahab Riaz can rattle Australia in any department and format of the game. However, Pakistan has been dealt with a blow after Mohammad Hafeez was ruled out for two weeks due to injury.

Thus, it would really be an uphill task for Australia to restrict Pakistan in their own backyard and prove to their selectors that they are worthy of playing in any condition and be the front-runner for the World Cup title. They started the tour on a positive note with an impressive victory in the solitary T20.

Australia is a squad with enough fire-power to blaze in any format of the game. Players like David Warner, George Bailey, Glenn Maxwell, all-rounder James Faulkner, seamer Mitchell Johnson among others are gems in their own right and will play a major role in guiding Australia to victory at any level. There are a few players however, who might not be the same as those above and ought to be scrutinised. Following are the players in question:

Brad Haddin: The wicketkeeper-batsman has been impressive for Australia in the past and especially with the gloves. But off-lately he has been struggling with his batting form and has been unable to score a fifty in the last 10 limited-over games that he has played in. Although the selectors have given him chances owing to his wicket-keeping exploits, he badly needs to fire with the bat if he wants to retain his position in the squad for the World Cup. With a strike-rate of 81.81, he can be of great use to the squad especially in the slog overs.

Glenn Maxwell: The explosive batsman from Melbourne needs no introduction as his batting in the seventh edition of the Indian Premier League (IPL) was sensational and is currently one of the most dangerous batsmen in the world, someone who can tear apart any bowling attack. However, his recent performances have been a cause of concern after he failed to score big in the last 10 matches of the limited-over format, with 13 being his highest in those appearances. The Australian selectors and fans would like to watch a repeat of his IPL accomplishments and would want him in the World Cup squad, provided he fires. With a strike-rate of 127 in ODIs, he would surely be the man to watch out for against Pakistan.

Mitchell Starc: The left-arm fast bowler from New South Wales is a favourite in the Australian squad for the Pakistan series due to his good swing action that can disturb the batsmen and compel them to make mistakes. He has had an impressive record in the recent past, which he has carried into the ongoing tour. He took 43 wickets in 24 games and an economy of 5.15 with the best figures of five for 20. He is an asset for the team and will be looked after by the selectors with Starc himself looking forward to use the opportunity and seal his place in the squad for the World Cup.

Sean Abbott: Making his debut to the National squad, the 22-year all-rounder from New South Wales has been impressive, especially with the ball in the domestic circuit. He claimed 16 wickets at an average of 20.63 in the 2013-14 Ryobi Cup. With 39 wickets in 24 games and an economy of 5.34, he would be aiming to have a shot at a place in the World Cup squad with his impressive bowling skills. He made his debut in the T20 match against Pakistan on October 5 and claimed his first international victim after conceding 17 runs. He will be another player to come under the scrutiny of the Australian selectors. 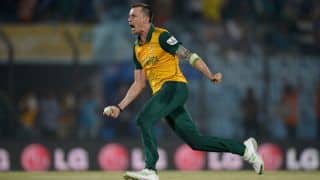 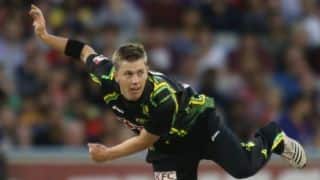