Pakistan would look to salvage some pride as they have already lost the ODI series.

Pakistan will face Australia in the third One-Day International (ODI) at Abu Dhabi on Sunday. Australia registered comprehensive victories in the first two ODIs and have already won the series. They’ll look to complete a merciless 3-0 whitewash, while Pakistan would look to salvage some pride and give their fans something to cheer about with a victory. Sameer Jha looks at some of the key battles that may ensue during the encounter.

Steven Smith vs Mohammad Irfan: Steven Smith, who has been given a chance to shine at the No 3 position in the absence of Shane Watson, scored a superb match-winning century (his first in ODIs) in the first match, but petered out after scoring 12 runs in the second ODI. The 25-year-old Australian will look to get another ODI ton, but will face stiff resistance in the form of Pakistan’s lanky pacer Mohammad Irfan. The speedster has bowled tight spells in the opening two ODIs, but has picked up only two wickets. The battle between him and Smith will be an exciting one to watch out for.

Glenn Maxwell vs Raza Hasan: Glenn Maxwell did not play his usual game, and made a slower than usual start to his innings in the second ODI. However, his 81-ball 76 proved to be match-winning as Australia chased down the target of 216 with relative ease. He would want to make a similar contribution in the third ODI too, but will have to contend with Raza Hasan. The Pakistani youngster, took the wicket of David Warner and bowled a few tight overs but was taken apart in the rest of his overs. He would want to be more consistent in the third ODI, and would also want to make sure that Maxwell isn’t allowed to get away to a flier.

Ahmed Shehzad vs Mitchell Johnson: Ahmed Shehzad looked in exquisite touch during the second ODI, and all was going well for Pakistan until his wicket fell. Australia’s Mitchell Johnson would look to make sure that he isn’t able to provide his team the kind of start he did in the second ODI. Johnson has been the pick of the bowlers for Australia, and has taken six wickets in the first two matches. He’ll want to make sure that his performance doesn’t taper off in the third ODI.

Umar Akmal vs Nathan Lyon: Umar Akmal’s talent as a batsman was never in question, but his tendency to play rash shots still exists. With Pakistan’s tendency to collapse like a heap of cards, he often comes in to bat at high pressure situations. It wouldn’t be unfair to say his performance suffers because of that. The 24-year old will be playing his 100th ODI during the Abu Dhabi match, and would look to make the occasion special by playing a match-winning knock. Among the bowlers who will look to spoil his party is Nathan Lyon. The Australian has bowled tight spells so far, and exploited the dry turning UAE wickets to his advantage. 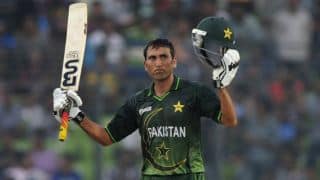 Should Younis Khan be brought back in Pakistan's ODI set-up? Mohammed Shami: I don’t find it too difficult to bowl at the death