Tipped to be the one to take over captaincy reins from Misbah-ul-Haq, Azhar Ali has done his reputation no harm with these wonderful performances.

Pakistan were humbled by Australia in the Test series. They not just lost the 3-match series 3-0, but the defeat in the Sydney Test is the first time they have lost six Tests in a row. Can this be called a new low for Pakistan? A team, which was on top of the ICC rankings just over three months back, find themselves at the fifth position after back-to-back series losses: first against New Zealand and now against Australia. However, there were some standout performers for Pakistan in this series, but then again, there were mediocre performances as well. The likes of Azhar Ali took his team to a commanding position, but seldom found support from his teammates.

The bowlers, too, had a tough task. The statistics show that Wahab Riaz, with 11 wickets, was Pakistan s highest wicket-taker, but they do not show the number of wickets he got off a no-ball. Fellow fast bowler Mohammad Aamer and one of the best bowlers in world cricket Yasir Shah were the two major disappointments in the bowling department. As far as the batting is concerned, they were let down majorly by their captain Misbah-ul-Haq. But the likes of Babar Azam and Sami Aslam, too, did not do their team any favour.

With that said, here s a look at Pakistan s performance in the series on a scale of 10:

Azhar Ali (9/10 406 runs at 81.2 & 2 wickets at 103.5): Azhar was the most consistent Pakistan batsman. He had a 50-plus score in every single match, but his biggest moment came when he scored an unbeaten 205 in the Boxing Day Test at Melbourne. He also scored a couple of fifties. He eventually finished as the second-highest run-getter of the series, behind Steven Smith with 441 runs at 110.25. He also rolled his arm over when needed and picked up a couple of wickets as well. Tipped to be the one to take over captaincy reins from Misbah, Azhar has done his reputation no harm with these wonderful performances.

Sami Aslam (2/10 48 runs at 12): Aslam was dropped after poor performances in the first two Tests. His four innings yielded 48 runs at 22. While he managed 22 and 15 in the first Test, he registered scores of 9 and 2 in the next two innings. He found it difficult to cope with the fast bowlers. The 22 he got in the first Test came of 100 deliveries. It was highly disappointing that he did not shine and get a substantial score after getting his eye in. His frustration got the better of him, and he edged the ball down the leg-side to Matthew Wade.

Babar Azam (2/10 68 runs at 11.33): Azam was entrusted with the No. 3 spot in the side but failed in all the three matches, with 23 being his highest score. In the Sydney Test, he was trapped in front twice by Josh Hazlewood off almost identical deliveries. He was also guilty of poking needlessly outside off, eventually caught at slip. After a terrific debut series against West Indies at UAE, Azam now had a forgettable tour of Australia. He has to make sure that he learns from this experience and comes out of this a better player.

Younis Khan (7/10 298 runs at 59.60): Younis played a couple of useful innings in this series, despite having a miserable one against New Zealand before this, and one got the feeling that things will not be any different against Australia. He was dismissed for a golden duck in the first innings of the tour, but then redeemed himself in the next innings by scoring 65 and played his bit in ensuring Pakistan almost chased down 490. However, his best knock came at Sydney when he scored an unbeaten 175 in the first innings, which helped Pakistan put up a respectable total. He once again played uncharacteristic shots to get himself out. He did so in the second innings at Sydney when he went after Nathan Lyon and holed out when Pakistan were trying to save a Test. Also the reverse-sweep against Lyon at Brisbane when Pakistan were chasing 490 will haunt him for a few more days at least.

Misbah-ul-Haq (2/10 78 runs at 12.66): A lot was riding on Misbah s shoulders. He is one of the few players in the squad, who has toured Australia number of times. He was expected to lead from the front with the bat, just like he did in England. His shot selection most times was questionable. He was either dismissed poking the ball outside off or holing out trying to go after spinners something that rookies or new entrants often do. But when someone with experience of over 70 Tests does that, one cannot do anything but look in disbelief. Misbah in this series failed, both as captain and batsman.

Asad Shafiq (6.5/10 239 runs at 39.83): Asad Shafiq was terrific in the first Test when his 137 helped Pakistan pull off an unbelievable win after being down and out. He batted incredibly well with the tail in that match. Pakistan were 220 for 6, chasing 490 when Sarfraz Ahmed departed for 48. He then added 82 with Aamer, 66 with Wahab and then 71 with Yasir to take Pakistan to the jaws of victory. It took a special delivery from Mitchell Starc to dismiss him. Barring that knock, Shafiq scored a fifty in his next innings at Melbourne. He followed that up with scores of 16, 4 and 30. He also held on to 5 catches, which was the most by a Pakistan outfielder.

Sarfraz Ahmed (8/10 226 runs at 56.50 & 9 catches): Sarfraz takes very less time to settle and regardless of the situation, plays a free-flowing innings, which injects momentum into the innings. He was no different in this series. He struck at over 80 and also scored a couple of fifties the last of which was a 72 not out at Sydney. He also scored an unbeaten 59 in the first Test at Brisbane, which ensured Pakistan do not get bowled out for an embarrassing score. He also held on to 9 catches behind the wickets. He registered 100 dismissals during the course of the series the sixth Pakistani wicketkeeper to achieve this feat.

Mohammad Aamer (4/10 5 wickets at 61.60 & 118 runs at 19.66): Aamer had a poor series by his standards, but he made a few useful contributions with the bat low down the order. However, his primary role in the side is that of a bowler, and he picked up just 5 wickets in the series. He did not take field to bowl in the second innings of the Sydney Test, as he was suffering from side strain. As a lower-order batsman, Aamer did a good job in the series, and we might see more of him at No. 8 in the future. He can take solace from the fact that he scored more runs than a few top-order batsmen like Misbah, Aslam and Azam.

Wahab Riaz (6/10 11 wickets at 36.36 & 52 runs at 8.66): Riaz worked hard throughout the series and reaped rewards. However, his tally could have been a bit more had he not overstepped, something he needs to work on desperately. He was probably the only fast bowler from Pakistan, who exploited the conditions very well. Wahab also scored a useful 30 with the bat, when Pakistan were chasing a world-record total at Brisbane.

Yasir Shah (4/10 8 wickets at 84 & 68 runs at 11.33): Not many can argue that this is one of Yasir Shah s worst series. Going at 8.86 in the Sydney Test has to be his ordinary spell ever. He finished behind Wahab as the second highest wicket-taker for Pakistan, but he conceded runs at an economy rate of 4.53. Pakistan stuck with him in all three Tests and did not give any chance to other spinners like Mohammad Nawaz or Mohammad Asghar, who were warming the benches. At Sydney, Pakistan certainly missed a trick by not playing another spinner. Not everyone, who got to Australia for the first time, come out with flying colours. At least now, Yasir knows what he has to work on. However, he showed a lot of grit while batting. He got 33 at Brisbane, batting at 10; he also faced 41 and 93 balls respectively at Sydney, the latter being as a night watchman at No .3. He proved that he is a dependable tail-ender.

Rahat Ali (2/10 2 wickets at 57): Rahat was picked only for the first Test, where he picked up just a couple of wickets. Pakistan realised that the attack was one-dimensional, with three left-arm quicks in the playing XI and went in with a right-handed bowler in the next two Tests.

Sharjeel Khan (310 44 runs at 22): Sharjeel made his debut in the third Test at Sydney, which turned out to be his only game of the series. He replaced Aslam in the XI, who was having a below-par series. He was dismissed early in his first innings, after edging the ball to slips. He came out all guns blazing in the second innings, but fell for a 38-ball 40, after he failed to clear mid-wicket off Lyon. Sharjeel, like many in the team, fell to a poor shot selection at a time when he had to play out just a couple of overs more to ensure Pakistan went into the final day with all their wickets intact.

Imran Khan (2/10 2 wickets at 77): Like Sharjeel, Imran, too, played just the final Test. He was smashed around the park by David Warner on his way to a ton before lunch on the first day. But he bowled much better the next day and got the wickets of Matt Renshaw and Hilton Cartwright.

Sohail Khan (5.5/10 3 wickets at 43.66 & 75 runs at 75): Sohail was brought in as a Rahat s replacement in the Boxing Day Test. Sohail started off well, striking run-a-ball 65 in the first innings and followed that up with 3 for 131 with the ball in Australia s first innings, going at 4.23 per over. He was, for some reason dropped for the final Test, and Imran was roped in. 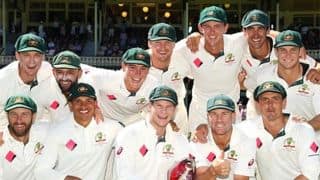