For a while #TeamMisbah will take a backseat, as Pakistan's next assignment is a five-match 50-over series against England.

A different captain, a different Pakistan. For a while #TeamMisbah will take a backseat, as Pakistan’s next assignment is a five-match 50-over series against England. To put things in perspective, the journeys of these two teams since ICC Cricket World 2015 have been polar opposites of one another. England have undoubtedly been in an upward surge. Pakistan, on the other hand, are still in the pursuit of finding the lost mojo. The format that they reined in the 90s has become their impuissance, so much so that they are placed at No. 9 in the ICC ODI rankings. But, to remind you, Pakistan can pull off the unpredictable. FULL CRICKET SCORECARD: Pakistan vs England, 1st ODI at The Rose Bowl

Pakistan played a two-T20I series against Ireland last week. The result was no surprise. Pakistan clinched the trophy 1-0 (one match being abandoned due to rain). However, they have found a bright aspect they have been seeking for desperately in the past few years: a swashbuckling opener who represents the swag worn by former Pakistani openers like Majid Khan and Saeed Anwar.

Sharjeel Khan, 27, scored the fourth-fastest century by a Pakistani batsman. Slightly oversized (my editor insists on political correctness), the opener bludgeoned (by bludgeon, I literally mean it) 152 runs off just 86 balls, inclusive of 16 fours and 9 sixes. At one point, it looked he would grace the 200-run mark.

Yes, they do have Azhar Ali, but they need someone who can take the bull by its horn. Armed with lazy elegance, he is a powerful hitter of the ball, someone who can dictate terms to the opposition. This means, Azhar Ali can relax at the other end, the way Anwar used to do when Shahid Afridi went all guns blazing.

If these two play well in harmony, Pakistan’s one box will be ticked.

With veterans like Mohammad Hafeez and Shoaib Malik to follow, the batting gets stronger. However, everything will boil down to what line-up they dish out.

With a class-apart batsman Sarfraz Ahmed at their disposal, they will not repeat the mistake of making him bat down the order. He deserves more time at the crease. Once he gets it eye in, he will deliver something that is due from him. In the ODI series against Ireland, 21-year-old Babar Azam batted ahead of him, at No. 4. Agreed, he has got talent, but he does not have what Sarfraz possesses — a calm head over the shoulders.

Sarfraz can run those ones and twos. He has that technique. He can manoeuvre the ball in gaps. He can keep the scoreboard ticking without taking risks. Meanwhile, Babar can use the long handle to destructive effect, a quality a No. 4 batsman does not necessarily need to have in shorter formats. Therefore, Hafeez at No. 3 followed by Sarfraz and Babar, seems to be the most preferable line-up. Also read – Predictions and Preview: Hosts look to continue domination at home

At No. 6 Malik keeps Pakistan on course. In fact, he can bat at any position. Over the years, he has won many a match for Pakistan. More than the experience, Pakistan need his superior ability to thrive under pressure. In addition, he is a handy off-spinner, with 151 wickets at 37.03.

They also have two all-rounders in Mohammad Nawaz and Imad Wasim, both slow left-arm orthodox bowlers, the breed that is the need in modern-day cricket. While the former’s strike rate reads 102, the latter bats at 124.

Pakistan, more importantly, have flourished with the help of their bowling unit in the past. Pace and reverse-swing, scoring runs at a run rate of 6 was always a difficult task. All the same, they have been lacklustre for the last half a decade. The pressure they exerted on the opposition in the 1990s and early 2000s is nowhere to be seen.

They have tried out numerous bowlers. A few even made headlines in no time, but faded with time. But one man stood rock solid with Pakistan cricket, and that is Umar Gul. With him back in the side after a knee injury, the bowling attack looks balanced with Mohammad Aamer at the other end.

Moreover, the newcomer Hasan Ali has taken 106 wickets at 24.52 in First-Class cricket. Given the English conditions help the pacers, the bowling trio will pose threat to the strong England batting unit.

Now let us narrow down to the leg-spinner, the ideal match-winner every team wants to feature in the playing XI. Yasir Shah, the cynosure of Pakistan’s bowling attack, will play a key role when the team is in trouble, especially when pitted against the likes of Eoin Morgan and Joe Root.

English batsmen will attack him, denting his spirit. But he has the venom of leg-breaks in his armoury, something that will scale up the wickets column on the scorecard.

All said and done, Pakistan’s leadership decides the fate. They have all the ingredients to beat the top-drawer teams. Unfortunately, it is execution of skills that they lack, and the onus lies on the captain to make sure that the team plays well as a well-integrated unit. Also read: Pakistan are No. 1 and cricket is proud of it

Inarguably, it will be a herculean task for Azhar Ali to emulate what Misbah-ul-Haq did in the Test series. Nonetheless, he has witnessed Misbah scripting history. He must have picked Misbah’s brain, at least. In fact, they must have sat together and discussed how Pakistan can get the better of England in shorter formats as well.

Misbah did not play fire with fire. He knew his team’s limitations. He knew how to make best use of Asad Shafiq. He knew when to make use of Yasir and Aamer. When the chips were down, he patted on their back instead of lecturing them.

Azhar Ali has a similar personality. Cool, calm and composed — a cliché that perfectly suits him. If he manages to take his team over the line, Pakistan cricket will cover all the bases, for they do not deserve to be at No. 9. 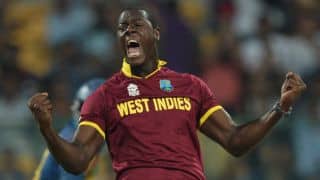