Jason Roy and Joe Root scored excellent fifties as England cruised to an easy win in the first ODI against Pakistan.

England got off to an excellent start in the five-match One-Day International (ODI) series against Pakistan, winning the match by 44 runs (D/L Method). Pakistan put on a competitive total of 260 on the board, but that was never going to be enough to trouble the England batsmen, considering how little assistance there was for the bowlers. Azhar Ali and Sarfraz Khan did score useful fifties, but did not carry on and score a big hundred, that could have perhaps tilted the game in Pakistan’s favour.England bowlers and batsmen especially Jason Roy and Joe Root made this win look ridiculously easy. Pakistan on the other hand will look to reassess their strategies ahead of the second ODI. Let’s look back at some of the highlights of the first match. FULL CRICKET SCORECARD: Pakistan vs England, 1st ODI at Southampton

Sharjeel Khan’s weird review: Sharjeel made a blistering 150 against Ireland and was in excellent form going into this game. He was however the first man dismissed for 16 by Mark Wood. Sharjeel looked to pull a ball, but the ball took the outside edge on his way to the wicketkeeper. Sharjeel however he gave his skipper at the other end the impression that he felt he did not touch it. Azhar Ali trusting his teammate, decided to take the review and the replays showed that Sharjeel had in fact nicked the ball. Pakistan had used up their only review at such an early stage. They could not take a review at a later stage when Babar Azam was adjudged leg before, despite getting an inside edge. Pakistan vs England, 1st ODI Full Updates

Azhar Ali’s captain’s knock: Azhar played a very calm innings and did not get bogged down with the wickets falling at regular interval at the other end. He got to his fifty off 84 deliveries and then started to play more freely. He was eventually dismissed for 82 off 110 and had given Pakistan a good platform from where they can get a big total on the board.

Sarfraz Ahmed Shoaib Malik dismissed in quick succession: Sarfraz and Malik could have lost their concentration after the rain break and as a result, bit set batsmen were back to the pavilion in a matter of four deliveries, which gave England the advantage in the closing stages of the match. Sarfraz, however made a valiant fifty, but Pakistan could have had about 10-15 runs more on the board had he stayed on till the end.

Umar Gul strikes early: Defending a modest 260, Pakistan needed to get off to a good start and that is exactly what happened as Hales was sent packing for 7. He looked to run the ball down to third man, but found the edge and the ball went into the hands of Mohammad Hafeez at first slip.

Jason Roy, Joe Root steady England innings:  Roy and Root put on 89 for the third wicket, better than a run-a-ball and set it up well for the middle-order to finish the match off. Root started off cautiously, then slowly got into this groove and started to smack the ball around.

Rain interruptions: With so many matches being called off due to rains, one felt that this game too could suffer the same fate. Play was halted in the 43rd over of the match but after about 10-15 minutes of stoppage, play resumed much to the relief of the players and fans all around the world. Play again stopped during England’s chase when England were well ahead of the Duckworth-Lewis par score. Play resumed, but after three balls in, the umpires once again decided that it was time to go off and it eventually resulted in the match being called off with England winning. 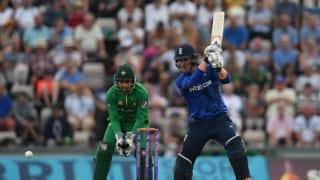