Pakistan vs England 2016, Day 3, 1st Test at Lord's: Chris Woakes 5-for and other highlights

Pakistan vs England 2016, Day 3, 1st Test at Lord's: Chris Woakes 5-for and other highlights

Pakistan after the end of Day 3 are in the drivers' seat with a lead of 281 runs against an buoyant England attack which held it own right at the dying moments of the game at Lord's.

Pakistan and England played out another riveting day of Test cricket at Lord’s in the first Test of the four-match series. Day 3 had everything wickets, runs, aggression, counterattacks, attrition along with random components (former cricketing legends, pigeons and owls, for example) and a vocal crowd. Regarded as one of the most crucial day of a Test, Day Three saw England rise from the ashes and Pakistan toil hard. Both teams had sparks of individual brilliance which now has set the game in a much exciting and thrilling manner. Vishal Mehra takes you through some of the key match highlights from the third day of play between England and Pakistan. LIVE CRICKET SCORECARD: England vs Pakistan 2016, 1st Test at Lord s

1. Misbah-ul-Haq falls for duck: After a brilliant knock in the first innings Misbah was expected to take Pakistan out of danger with the team reeling at 56 for 3. Misbah, who was just 1-ball-old, tried to slog Moeen Ali over mid-wicket. This rare spark of madness cost his downfall as Alex Hales came running and pouched a simple catch to hand Misbah his 7th duck in a 62-Test career so far.

2. Asad Shafiq’s resistance: Much was expected from Shafiq on this tour after scoring good runs in the warm-up games before the 1st Test. In the first innings he had scored a classy 73 from 130 balls. In the second innings he came out at a very crucial point of the match for Pakistan with 4 wickets down. A quick wicket or two would have swung the match in England’s favour. Shafiq weathered off Stuart Broad and Chris Woakes who were looking dangerous in tandem. Interestingly, Shafiq scored most of Broad and Steven Finn, who were getting the ball to move. He was unlucky to get out on 49 but would not have minded much, for it was an absolute peach from Woakes.

3. Sarfraz Ahmed’s gritty knock: If the first innings had shown how aggressive Sarfraz could be, the the second exemplified his grit. Sarfraz put up a 39-run stand with Shafiq for the 6th wicket, which helped Pakistan get the lead cross the 200-run mark. Sarfraz was extremely unlucky to get out in the very dying moments of Day 3 when he nicked a simple catch to Jonny Bairstow off Woakes. Sarfraz made 68-ball 45.

4. Yasir Shah’s prowess with bat: After showing his might with ball, Yasir took full charge and whiled his bat to perfection. He remained not out on 30 off 57 balls with 5 boundaries (many of which came past third man). Yasir took a liking to Finn in particular, hitting 20 off him alone. With this innings Yasir also recorded his best ever score in Test surpassing his previous best of 25. Yasir struck a 40-run stand for 7th wicket with Sarfraz.

5. Chris Woakes‘ 5-for heroics: After his first-innings masterclass Woakes continued to spellbound everyone with ball. This time Woakes mainly relied on setting batsmen up to snatch wickets. Shan Masood was the first to fall to the trap. Woakes got the ball to swing into the batsmen and then got one to go the other way which produced a nick to the wicketkeeper. His second wicket was a bit lucky as Azhar Ali leg-before call could have gone either way. ALSO READ: Woakes rise as all-rounder in Tests and ODIs

The delivery to get Shafiq was something even Wasim Akram, sitting in the gallery, would have been proud off. He got the ball to nip back into the batsmen and make its way between the bat and pads straight on to the stumps. Woakes was once again in action as he grabbed Sarfraz at the end of the day. He kept bowling on an outside-off line to which Sarfraz finally gave in, with a faint edge to Bairstow.

Woakes fifth victim was Wahab Riaz, who gloved a misjudged short-ball to the keeper. With this Woakes picked his 11th wicket of the match, and currently has figures of 11 for 101. 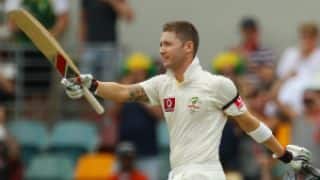 Hundreds on Test debut and other landmark occasions