Pakistan registered their first Test win at Lord's after 20 years since 1996, as they thrashed England by 75 runs at the same venue in 2016.

The entire anticipation built around Mohammad Aamer, Yasir Shah or Pakistan in general indeed paid off. What a win it was from the visitors! Pakistan lead 1-0 against England following the 75-run win in the 1st Test at Lord s on Sunday, with almost every person chipping in. While Yasir s 10-for won him the Man of the Match award, Misbah-ul-Haq had set the tone for Pakistan on Day 1. The talented Asad Shafiq has chipped in twice, while Rahat Ali came out of nowhere to take the first three fourth-innings wickets. England put up a good fight, with Chris Woakes 11 wickets keeping Pakistan at edge. Ultimately on Day Four, the game belonged to the visitors all the way as Rahat grabbed early wickets including skipper Alastair Cook. The middle-order fought back, but it was not enough. The climax was Yasir and Aamer s finishing touch to keep Pakistan ahead in the series. Here are some highlights from Day 4 of 1st Test at Lord s: FULL CRICKET SCORECARD: England vs Pakistan 2016, 1st Test match at Lord s

Rahat Ali s three-wicket haul: Day 4 began with Stuart Broad s early wickets to end Pakistan s innings. England needed 283, but Rahat pinned them down early on. He pitched one up close to the off stump, Cook tried to defend tentatively, and paid the price for the same. Rahat s next target on hand was Cook s partner Alex Hales, who slashed at one outside off, and Mohammad Hafeez took an excellent reflex catch at second slip. Lastly, Joe Root went for an unnecessary pull early on and perished.

James Vince and Gary Ballance balanced partnership: After they lost those three early wickets, England were on the lookout for a big partnership. Vince and Ballance provided some momentum to the collapsing side, adding 49. Vince’s 42 came off 49 deliveries and included 9 fours. Ballance made it to the final squad after all the doubts and speculations, batted with grit and determination for his 46-ball 43. ALSO READ: Rahat Ali’s 3-for rattles England chasing 283 runs

Jonny Bairstow s cameo: After Vince was claimed by Wahab Riaz, Jonny Bairstow entered with responsibility to take England towards finishing line. He eventually failed, but played cleverly to give England hope. Bairstow and Ballance added 39 to keep England in the race. After Ballance and Moeen Ali were dismissed by Yasir, it all depended on Bairstow once again. Bairstow has shown earlier what he can do in crisis situations, as witnessed against Sri Lanka and this time the expectations were high. Now he added 56 with Woakes, taking England past the 200-mark. Unfortunately, once he departed for 48, the tables were switched and game went for Pakistan.

Yasir Shah, Mohammad Aamer s finishing touch: As Vince, Ballance, Bairstow and Woakes put up one gritty show after another, England came back into the Test. Journalists probably thought of changing their headlines and news, but Yasir and Aamer eventually sealed things. Yasir was back to his form with a ripper to remove Ballance, which tilted the momentum of the game towards Pakistan, leading to a deluge on social media as old-timers were reminded of Andrew Strauss s dismissal off Shane Warne in Ashes 2005. Yasir ran through, dismissing Moeen, Bairstow and Woakes. Aamer handled the lower-order with those excellent yorkers. He first got Broad, followed by Jake Ball. Lord s witnessed the characteristic celebrations as Aamer soared flying around the ground, almost literally! ALSO READ: VIDEO: Yasir Shah’s does a Shane Warne to Gary Ballance

Pakistan s unique celebrations: Pakistan celebrated their victory over England at Lord s with an unusual celebration, when the squad performed a series of press-ups. Misbah s men had been on an army boot camp before the tour to improve their infamously poor fitness, and Younis Khan led the squad in performing a routine of press-ups followed by a salute in front of the ground s famous pavilion. This celebration was similar to what was witnessed from Misbah after he reached his century on Day One. 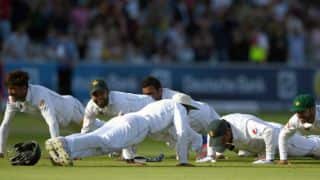 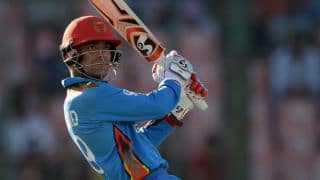