Joe Root was awarded the Man of the Match award for another brilliant knock in dire situations.

England and Pakistan played their second game of the five-ODI series at Lord’s cricket ground. Winning the toss, Azhar Ali and his troops came out to bat and where in a spot of bother from the beginning. They lost their openers soon and were reeling at 2 for 3 at one stage but came back to post 251. England came out to bat and also did not get to a great start but their middle-order, guided well by Joe Root and Eoin Morgan, saw them through to take a lead of 2-0 in the series with three games to go. Aditya Sahay brings the best moments of the match as follows: FULL CRICKET SCORECARD: Pakistan vs England 2016, 2nd ODI at Lord’s

Pakistan 2 for 3 inside first four overs:  Pakistan got off to a poor start as their batsmen looked clueless against the seam movements of England’s opening bowlers, in the form of Chris Woakes and Mark Wood. Sharjeel Khan and Azhar did not even trouble the scorers as they were out for 0 whereas Sami Aslam departed for 1. Woakes and Wood extracted good pace and seam from the turf and applied the brakes on the Pakistani batting from the very beginning.

Sarfraz Ahmed and Babar Azam’s fightback: Pakistan’s wicketkeeper-batsman, Sarfraz, looked in complete control from ball one as he worked hard for his runs. He danced on the pitch, moved around constantly to disturb the line and length of the bowlers whereas Azam did not leave the opportunity of going after the bad balls. The duo added 64 runs for the third wicket and did it in 63 balls. On a green pitch with the ball doing all the talking, they must be complimented for their effort as they stuck around with patience and calculative strokeplays.

Sarfraz led the way with a timely hundred: Sarfraz did not allow the momentum to shift completely towards the home team as he added another vital 59 runs with senior man, Shoaib Malik. He rotated the strike, timed his shots well and stitched a calculative innings. He got to his second One-Day International (ODI) hundred and got out in the 43rd over. He had only six boundaries to his well-compiled innings which shows his concentration and understanding of the situation. ALSO READ: PAK vs ENG, 2nd ODI: Sarfraz reaches 2nd ODI hundred

Imad Wasim led the late onslaught: Wasim ensured Pakistan went past the 250-run mark before getting all out with just one ball to go in their innings. Wasim stuck to one end as wickets tumbled from the other end. Wasim was not out at 63 from 70 balls with one huge six off Adil Rashid. This was Wasim’s second half-century in ODIs and proved his mettle as a handy lower-order batsman for his side.

England lost their in-form openers to push them on the backfoot: Jason Roy, who has been in splendid form off late, departed early whereas Alex Hales continued to have a torrid time in this summer versus Pakistan with another no showing in second ODI at Lord’s. Both the openers were back in the hut with the score at 35 for 2. The onus shifted to Joe Root and Eoin Morgan to start the repair work.

Root and Morgan piled up 112 runs together: Skipper Morgan came to bat in a tricky situation with the pitch reverse swinging a bit and Pakistani bowlers balling at tight lines. Root and Morgan stood firm with stylish shots off the bad deliveries and rotated the strike swiftly. They never looked in any sort of problem as Morgan played his reverse sweeps whereas Root went with a calculative approach. Morgan scored a valiant 68 off 80 balls with nine boundaries and departed with England well on top of the game. ALSO READ: England win 2nd ODI vs Pakistan by 4 wickets

Root missed out on a ton but Moeen Ali completed the formalities: Ben Stokes made a vital 42 after his skipper’s departure but Root’s 89 ensured there were no hiccups for his side. Root missed a ton as he was out by Wahab Riaz but Moeen ended the formalities with 15 balls to spare and four wickets still remaining for the team.

Pakistan have lots to ponder upon with their erratic batting display. Sarfraz was top-notch with a fluent century but Root’s 89 and Morgan’s 68 ensured there were no hiccups for their side. Pakistan needs to pull up their socks and bounce back to keep the series alive till the series finale. Root was awarded the Man of the Match award for another brilliant knock in dire situations. 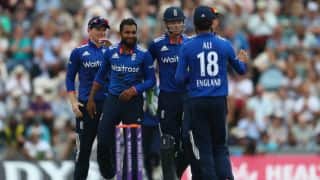