The name of Iftikhar Ahmed is doing the rounds before the eve of the finale Test to replace Mohammad Hafeez.

England and Pakistan are set to lock horns in the final of the four-Test series at The Oval. England are on the verge of winning the series with a the current lead of 2-1. Pakistan, known for their inconsistencies, find themselves in this position after winning the first Test at Lord’s. Their fast bowlers have gone out of steam as they are not used to bowling for long spells while playing in the sub-continent while their senior batsmen, like Mohammad Hafeez and Younis Khan, have failed on the tour. Misbah-ul-Haq needs to find out a team combination to again beat England and draw the series. He will like to make changes in his opening pair as Hafeez looks completely out of sorts. The name of Iftikhar Ahmed is doing the rounds before the eve of the final Test to replace him. Aditya Sahay takes a look on the 25-year-old’s records and credentials before The Oval Test. Full Cricket Scorecard: England vs Pakistan, 4th Test at The Oval

One-Day International (ODI) debut against England: Iftikhar knows the England team well. He may don the Test cap for the first time in The Oval but yes he is still acquainted with the English team. He made his ODI debut against the same team in October, 2015. He did not have a memorable debut as his team was taken to the cleaners by Alex Hales’ 108. It was Iftikhar’s part time, yet handy, off break which got his team the wicket of Hales. He does roll his arms with the ball and is effective. With the pitch in The Oval expected to turn a bit, as the match progresses, he can be useful with Yasir Shah. Being a slightly unknown package in England’s camp can also work well for him as he may surprise them with the ball. ALSO READ: Pakistan recall Umar Gul for ODIs vs Ireland and England

Decent record in First-Class cricket: Iftikhar is a right-handed batsman and an useful bowler. His First-Class record may not be outstanding but by no means is it to be taken lightly as well. The youngster has scored three centuries and also nine fifties to his name. These records have been achieved by him in only 31 matches and that speaks volumes for itself. He has the knack of learning and that too quickly and may just be the change Pakistan is looking forward to with their opening slot. Sami Aslam made the most of it in Edgbaston and played with utmost ease when the rest of the order crumbled. The two youngsters can communicate better and pave the way for a better start for the team. He would still have to face the menacing pair of James Anderson and Stuart Broad.

A valiant 92 and 41 not out against England and Worcestershire: On England’s tour of UAE against Pakistan in 2015, the visitors played a two-day tour game prior to the start of the series. Iftikhar was a part of the Pakistan A side and he stitched a well composed innings of 92 not out wherein he faced Anderson, Broad and Moeen Ali, the regulars from England’s Test team. Before the start of the third Test in the ongoing series, Iftikhar also featured in Pakistan’s tour game against Worcestershire. He contributed with a vital 41 not out which shows he is in right gears if given a chance.

If he plays, he will be filing the big shoes of Hafeez but will be given a lot of confidence as he would be featuring in a must-win game for his side. He can follow the path of Aslam, who struck 82 and 70 in both the innings. He may be given an uphill task to open the innings being a middle-order batsman. If he plays naturally, he can help in changing Pakistan’s dwindling fortunes up the batting order. He can also play the role of England’s Moeen as an off-spinner. A few good performances in the inaugural Pakistan Super League (PSL) and domestic matches shows he is ready for a big opportunity but the test will be how he handles it, if given a chance. 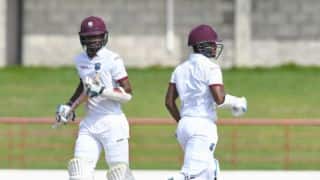 Why Virender Sehwag feels Wriddhiman Saha is the "right choice"