The match could have belonged to Porterfield or Sarfraz, but when Rameez Raja is a part of a match, it becomes his.

Following West Indies’ victory over UAE earlier in the day, Pakistan vs Ireland at Adelaide Oval became a must-win contest for both sides. William Porterfield stole the show with uncharacteristic aggressive batting, but found little help from his teammates. Ireland scored 237, Ahmed Shehzad and Sarfraz Ahmed added 120 for the opening stand, and Pakistan knocked off the remaining runs with plenty to spare. Here are the highlights of the match. Top 10 batsmen in ICC Cricket World Cup 2015

William Porterfield’s hidden artillery: One usually expects Porterfield to anchor a team innings with the big hitters accelerating around him, but today he came out to bat all guns blazing. He pulled Ehsan Adil for four in the second over of the match, hit Sohail Khan for a six in the seventh over, brought up his fifty in 59 balls and with wickets falling around him, and finally got his hundred in 125 deliveries. He eventually fell for 107 — an innings studded with 11 fours a six. Nobody else reached 30. Top 10 bowlers in ICC Cricket World Cup 2015

Umar Akmal’s four-play: Umar Akmal’s gauntlets had been given away to Sarfraz Ahmed; his green zinc oxide, to goodness-knows-whom. In return, he had been granted a catching ability to stun the world. If the catch of Ed Joyce was a dolly, the blinder he took at short-cover to dismiss Niall O’Brien was not. He also caught Stuart Thompson at short cover and John Mooney at short mid-wicket. In the process Umar became the third non-wicketkeeper to take four catches in a World Cup innings after Mohammad Kaif and Soumya Sarkar. Top 10 fielders in ICC Cricket World Cup 2015

Ireland open at the close: One of the trends of ICC Cricket World Cup 2015 have been deluges from overs 41 to 50. From 179 for four after 38 overs, they were probably expected to score in excess of 260. However, Sohail Khan, Rahat Ali, and Wahab Riaz bowled beautifully, and Ireland were skittled out for 237, adding a mere 58 from the last 12 overs. ICC Cricket World Cup 2015: POINTS TABLE

Pakistan open, and close match: Ireland needed a few initial breakthroughs, but a well-paced 120-run opening partnership between Ahmed Shehzad and Sarfraz Ahmed killed the contest. Shehzad fell for 63 and Haris Sohail was run out cheaply, but Sarfraz and Misbah-ul-Haq added 82 to bat Ireland out of the tournament. ICC Cricket World Cup 2015: SCHEDULE & MATCH DETAILS

Sarfraz Ahmed ends an agonising wait: No Pakistan player had scored a hundred in ICC Cricket World Cup 2011, and just when it seemed this edition would go barren for them, Sarfraz scored a hundred that was cautious in the beginning, enthralling afterwards, and excruciating in the end. Sarfraz had reached 90 in the 38th over, but got to his hundred only in the 45th. Umar Akmal was so keen on helping Sarfraz reach the milestone that he did not score from 21 of the 29 balls he faced. Top 10 wicketkeepers in ICC Cricket World Cup 2015

Cricket ka Raja: Today’s match could well have belonged to Porterfield or Sarfraz, to Umar Akmal, or to the fast bowlers; but when Rameez Raja is a part of a match, it becomes his match by definition. Rameez arrived spotting a Fedora hat; introduced Porterfield as Peterfold during the toss, and referred to “slips” as “slippers.” In other words, he was certainly today’s Man of the Player. ICC Cricket World Cup 2015: Complete Coverage 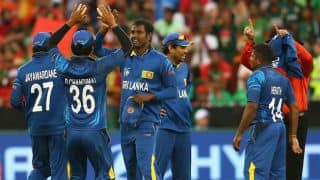