Bruce Murray, that outstanding New Zealand fielder, pulled off a sensational catch with a banana in his hand.

November 10, 1969. Bruce Murray, that outstanding New Zealand fielder, pulled off a sensational catch with a banana in his hand. Abhishek Mukherjee looks at the bizarre incident that stood out from the Test that ensured New Zealand’s first series victory over Pakistan.

New Zealand were having an excellent tour of Pakistan in 1969-70. They were in trouble at Karachi, requiring to bat out three-and-a-quarter hours or chase down 230, and despite being reduced to 11 for 3 they saved the Test thanks to some resilient batting from Brian Hastings, Mark Burgess, Vic Pollard, and Bryan Yuile.

On a turning track at Lahore, Pollard and Hedley Howarth bowled out Pakistan for 114 on Day One. Bruce “Bags” Murray (he earned the nickname because of his initials: his full name was Bruce Alexander Grenfell Murray) and Hastings gave them a lead of 127. Pakistan were bowled out cheaply again, and New Zealand chased down the 82. The 5-wicket win was their first against Pakistan.

They needed to save the next Test at Dhaka to clinch the series. Graham Dowling decided to bat, and New Zealand batted well into Day Two of the 4-day Test. Glenn Turner batted for over 7 hours for his 110; Dowling, Hastings, and Burgess all held on grimly; the tourists scored only 273, but managed to bat 166.3 overs. Intikhab Alam, leading Pakistan, finished with figures of 56-26-91-5.

Pakistan started cautiously, but seized the initiative on Day Three, trying to score as much as possible. Shafaqat Rana batted with grit, but the scoring rate picked up only after Asif Iqbal joined him at the crease. Asif eventually fell for a 157-minute 92 (out of 140 during his stay) with 13 boundaries. It was during his stay that it happened.

Planting a plantain, and the catch that never was

“Bags” was fielding at third man, and was continuously pelted with fruits by the Dhaka crowd for some reason. Things eventually got out of control, and Murray ran to his captain. Dowling complained to Shujauddin Siddiqi and Daud Khan, the umpires, and threatened that he would leave the ground if there was another assault on his men.

Murray did not, as expected, have to wait long for the next blow. It happened during an over from Dayle Hadlee. Dickie Bird later wrote: “An expertly aimed banana, travelling at a fair old lick, flew over the fence and became, quite literally, a pain in the neck for poor old Bags.”

What followed was hilarious. The following happened in sequence:

One: Murray picked up the banana and ran towards the pitch, brandishing it quite visibly.
Two: Dowling noticed Murray’s wild run and shouted at Hadlee to stop his run-up.
Three: Unfortunately, Hadlee did not hear Dowling’s call. He bowled anyway. The ball took off from a length.
Four: Murray, meanwhile, kept running in, banana in hand. The umpires did not notice him running.
Five: Asif, oblivious to all this, played the ball to gully. There was no fielder there, or at least, there was not any when Asif played the stroke.
Six: Murray kept on running and flung himself to take the catch, one-handed, the banana still gripped firmly in the other.
Seven: The New Zealand fielders celebrated, but unfortunately the umpires declared it a dead ball. To include a fruity pun from Bird, Murray “must have felt like a bit of lemon”!

Intikhab declared as soon as Howarth had Asif caught behind, a mere 17 runs ahead. New Zealand were reduced to 101 for 8 by Intikhab and Pervez Sajjad, but Bob Cunis hung around for 109 minutes, helping Burgess add 96 for the ninth wicket. Burgess himself remained unbeaten on 119 before he became Rana’s first (eventually only) Test wicket. Intikhab finished with match figures of 10 for 182.

New Zealand were bowled out for 200, leaving Pakistan to chase 184 in 140 minutes. Whatever hope they had of chasing it down was abandoned after Cunis removed both openers with a mere 12 on the board. Play was called off with Pakistan on 51 for 4 from 15 overs, all 4 wickets going to Cunis. The draw gave New Zealand their first series victory over Pakistan. 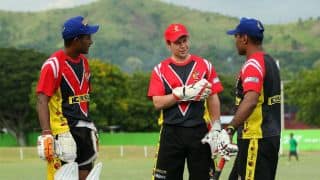 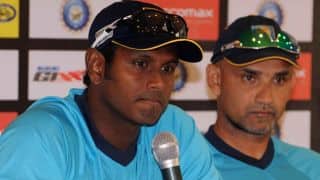