Pakistan managed to take 1-0 lead after winning the first T20I by seven wickets. Varun Arora looks at the highlights of the T20 encounter.

Kane Williamson’s first duck in T20I: Kane Williamson who was leading the New Zealand side in this T20I international was sent back to the pavilion by Anwar Ali on the first ball he faced in the match. It was an unusual sight to see Williamson depart in an awkward fashion. This was his first duck in the 18 T20I he has played so far. Ali ran in and darted a good length delivery just outside off stump which came back a bit and Williamson failed to get a bat on it. The umpire with no hesitation raised his finger quickly which sent back Williamson packing.

Pakistan’s early attack: Pakistan captain Shahid Afridi made three bowling changes in the first three overs and all of them managed to knock out one Kiwi batsman. The first one to go was Williamson was dismissed leg-before by Ali. Anton Devcich who came in next was removed in the same fashion by Sohail Tanvir in the second over of the match. The third one to depart was Ross Taylor was taken aback by the bouncy delivery bowled by Mohammad Irfan which he top edged to the point fielder.

Corey Anderson’s big strikes: Corey Anderson went on to make 48 off just 37 deliveries which included four sixes and a lone boundary. His entertaining innings included four muscular swaps which went flying over the boundary ropes reminding of his fastest hundred in ODI cricket. His first six came off the bowling of Mohammad Hafeez which went sailing over the straightish boundary. Ali was also treated with two twin sixes in the 13th over both hit in the same deep square-leg region.

Saad Nasim’s acrobatic fielding: Saad Nasim was exuberant in the field as he first took a brilliant catch to dismiss Anderson in the 16th over. Anderson went for the big hoick and Nasim who was fielding on the deep mid-wicket boundary completed a brilliant running catch to dismiss Anderson just short of his half-century. He did it again when James Neesham swung a flighted delivery towards the mid-wicket region, where an agile Nasim jumps and pushes the ball back into play, saving four crucial runs for Pakistan.

Sarfraz Ahmed’s unbeaten 76: Sarfraz Ahmed who came out to open the innings for Pakistan Awais Zia stayed till the end and made sure Pakistan cruised to victory. Sarfraz’s innings was paired up with eight well struck boundaries and two sixes. Ahmed again impressed with bat in this format as he steered the Pakistan innings from the start. This was also the top score by a Pakistan wicketkeeper in T20I. He was later awarded the Man of the Match for his performance. 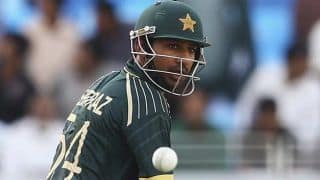 India vs Australia past encounters: Part 1 of 4