NZ scored 403 in the first innings of the 2nd Test, an improvement from the previous game.

Pakistan have been running high on confidence in the recent past, having whitewashed the two-match Test series against Australia, before winning the first encounter of the three-Test series against New Zealand by a 248-run margin. The Kiwi batsmen disappointed the most in that Test, with Tom Latham’s century being one of the few bright spots for the visitors. The second Test however, has been a different story so far.

The first innings of the first Test saw the visitors get dismissed for a score of 262, thanks to Tom Latham‘s 222-ball 103. Batsmen Corey Anderson and BJ Watling missed out narrowly on their half-centuries, scoring 48 and 42 respectively. The second innings saw an almost same story from the batsmen as they continue to fair poorly with only tail-ender, Ish Sodhi scoring the highest score of 63 in the innings off 102 balls including seven boundaries and a six with a strike-rate of 61.76. Opening wicketkeeper-batsman and skipper, Brendon McCullum was dismissed on 39, falling 11 runs short of his 29th Test fifty.

It seemed like New Zealand were on course to suffer the same fate as Australia. However, the second Test at Dubai saw a different scenario. Winning the toss and electing to bat first, the New Zealand batsmen were off to an impressive start with skipper McCullum scoring 43 off 69 deliveries with four boundaries and a couple of sixes. It was another Latham show as the 22 year-old scored his second Test century and became the first New Zealand batsman in 24 years to score a century in two consecutive Tests. Watling and Mark Craig too contributed with the bat scoring 39 and 43 respectively. Kane Williamson and Sodhi chipped in with 32 runs apiece to help New Zealand post 403.

Following the impressive stint with the bat in the first innings of the second Test, the Kiwis have surely gained confidence of excelling in sub-continental conditions. The performance would also help instil the belief that they have a chance to level the series. However, they must make sure that they shine in their bowling department as well, and with Pakistan in tremendous form with the bat, it is surely going to be an uphill task for the Kiwi bowlers to restrict the hosts.

More than this Test, this comes as great news for New Zealand, with the World Cup to be held in a few months in their own backyard. A good performance on the sub-continental tracks could well prove that New Zealand have a strong batting line-up that could play really well and can demolish any bowling attack on any track and conditions. However, they could really be vulnerable, and the teams who have already played New Zealand in their backyard must know that it is always a gruesome task to beat them at their home.

Latham’s exceptionally good form in the first two Tests against Pakistan in UAE has certainly attracted the selectors and is well on the radar of making it to the World Cup squad. Another good performance in the upcoming innings or match could certainly see him making his way for the mega event. McCullum, who is most certain to lead his team at the grandest stage of all, too has to pile up more runs with the bat in the upcoming games, including the ODIs to bolster his confidence before heading into the event.

However, the only remaining concern is that of the middle-order, which has been shaky off late and needs to be more consistent in order to boost New Zealand’s chances at the World Cup. Players like Williamson, Ross Taylor, Anderson and Jimmy Neesham need to pile up more runs to stabilise the order. Interestingly, the tail-enders have been performing well with the bat recently, especially Sodhi.

Overall, New Zealand might have a low Test rank, but judging by the ammunition and the form they are currently gaining, it would surely be interesting to watch how they perform in the upcoming games as they have began their build-up to the World Cup in quite a good-fashion. Although, it’s too early to comment on their form, but it surely looks like a step in the right direction by the Kiwi batsmen. 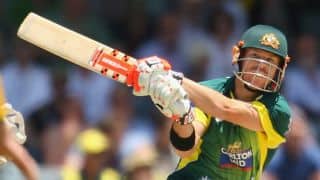