If Pakistan manage to chase the total posted by New Zealand, they will win the Test series 2-0.

The second Test match between Pakistan and New Zealand has come down to an interesting last day’s play at Dubai. New Zealand declared their second innings after getting to a total of 250 and gave Pakistan a target of 261 to chase.

Ross Taylor was the top-scorer for New Zealand as he reached his ton and stood tall as he scored 104 which included 12 boundaries. Yasir Shah, the newly introduced leg-spinner returned with a five-for. Pakistan are currently staged at 75 for four. Shan Masood, Taufeeq Umar, Azhar Ali and Misbah-ul-Haq have been dismissed so far in the day. Pakistan still require 186 runs to win from  40 overs.

If Pakistan manage to chase the total posted by New Zealand , they will win the Test series 2-0. Whereas, New Zealnd will also be eyeing six more wickets to equal the series.

Below is the list of highest fourth innings total achieved against New Zealand in Test cricket: 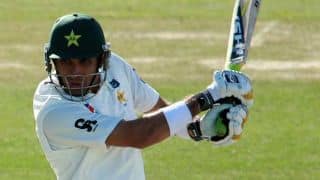