Kiwi Skipper Brendon McCullum tried as many as six bowling options on Day 1.

Pakistan finished on a commanding score of 281 for three at the end of the opening day of the third and final Test, with Mohammad Hafeez’s blistering century being the highlight of the innings so far. Amit Banerjee takes an analytical look at the innings.

The ongoing Test series between Pakistan and New Zealand has seen the former carry their dominating form over from the recently concluded against Australia, which the Pakistanis won 2-0. Except for a brief fightback displayed by New Zealand in the second Test, which turned out to be a hard-fought draw, the current series has been about Pakistan excelling in all departments. The first innings of the third and final Test was no exception either.

Pakistan won the toss and chose to bat, looking forward to letting their batting arsenal feast on a track that had a treasure of runs buried underneath it. The match started off in remarkable style, with Mohammad Hafeez hitting the first ball for a four towards third-man. While Hafeez was making most of the runs, Shan Masood, who had been brought in as a replacement for the injured Ahmed Shehzad, could not make much of a mark as he was dismissed for a petty score of 12 off the bowling of Mark Craig.

The second-wicket partnership between Hafeez and Azhar Ali was worth 87 runs, though Ali could not register another big score like his previous innings and fell for 39. Younis Khan, who had a remarkable series against Australia and scored a century in the first Test, was dismissed on five off the bowling of Daniel Vettori. This should not however deter the veteran batsman, who has defied his critics with an impressive string of performances over the year.

Beyond Younis’ dismissal, it was a Pakistani batting show all the way. Hafeez picked on the bowlers at will, playing strokes all over the park to collect 20 fours and three sixes. ‘Professor’, as he is known amongst his team-mates, justified his spot as an ideal opener for Pakistan along with Ahmed Shehzad, and should be a batting mainstay for the World Cup squad along with the likes of Misbah, Younis, Shehzad, Azhar and Sarfraz Ahmed. Skipper Misbah showed steady support from the non-striker’s end, scoring 38 from 107 balls. Pakistan were well-positioned to put up a big total on the second day of the Test and, following which the Pakistan bowling duo of Zulfiqar Babar and Yasir Shah should be able to target the Kiwi batsmen at free will.

For New Zealand, a lot of questions have to be answered especially in terms of their bowling attack. Skipper Brendon McCullum tried as many as six bowling options, with spinners Craig and Vettori emerging as the only wicket-takers of the match. The pacers went wicketless, and Ish Sodhi ended with the highest economy among the bowlers.

Vettori, who is the most successful left-arm spin bowler of all time with 361 dismissals, was definitely the highlight of the day for New Zealand, breaking/equalling a few records in the process. The bespectacled left-arm spinner became the most capped New Zealand Test cricketer, surpassing Stephen Fleming’s tally of 111, along with having the second longest career span after Bert Sutcliffe.

The second day was postponed to by a day after the tragic news of Phillip Hughes’ death brought a pall of gloom over the Sharjah ground, with the players from both camps apparently in a state of shock of the young Australian’s death. What remains to be seen is whether the players, especially the batsmen at the crease, can retain the same level of concentration on Friday. 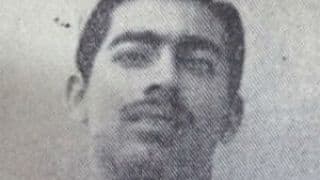