New Zealand once again emerged the dominant side at the end of Day 3 of 3rd Test against Pakistan.

New Zealand finished on a score of 637 for eight at stumps on Day Three of the third and final Test against Pakistan at Sharjah on Saturday. The visitors managed to gain a massive 286-run lead at the end of the day, and likely to register a series-levelling win if they continue the way they are progressing. Amit Banerjee analyses the third day of play, as well as what the next couple of days look like.

New Zealand once again emerged the dominant side at the end of Day Three of the third Test against Pakistan, adding 388 runs during the course of the day for the loss of seven wickets, and going on to post their third-highest all-time innings total in Tests in the process. The Kiwis, who have had a great year so far in Tests by winning all the Test series played in 2014, managed to consolidate on the heroics of the second day, in which they took seven wickets for 70 runs before ending on a total of 249 for one.

The biggest highlight of the day was the hard-hitting batsman and skipper Brendon McCullum, who smashed his way to the fourth double-century of his career. McCullum, who had recorded the fastest century by a New Zealand batsman, reached the milestone in just 186 balls, making it the fourth fastest double-ton of all time.  ‘Baz’, as he is known amongst his team-mates, inspired his fellow batsmen to tear the Pakistani attack apart.

Kane Williamson, who played the silent partner for most part of the 297-run partnership he shared with McCullum, recorded his highest score in a Test innings, though he missed out on a maiden-double hundred by eight runs. What worked for New Zealand, which did not materialise in the Pakistan innings, was that several batsmen contributed with valuable knocks, instead of letting a single batsman do the entire job of getting the runs [Mohammad Hafeez’s 197 forming a major chunk of Pakistan’s 351].

Not less than three batsmen were dismissed on the exact score of fifty, the concerned individuals being Ross Taylor, Corey Anderson and Tim Southee. Taylor survived a dismissal scare when he edged the ball to the wicket-keeper, but the delivery was adjudged a no-ball. Anderson kept the big hits coming along New Zealand’s way after Williamson’s dismissal. Southee was crucial in getting the side past the 600-run mark after the team had suffered three quick dismissals. His two sixes also helped New Zealand break Australia’s record of most sixes in a Test innings.

The Kiwi rampage is bound to have a psychological impact on the Pakistanis. From a general perspective, the third day of a Test match can been seen as crucial to deciding the course of the match. While the Pakistanis were in control of the match on Day One, New Zealand undo it by taking the hosts by surprise for the next two days. With the visitors aiming to stretch the lead to 300 or more on the fourth day, the Pakistan batsmen face an uphill task of handling the opposition bowlers and save the match and the series in the process. The ball will however, be in New Zealand’s court tomorrow. 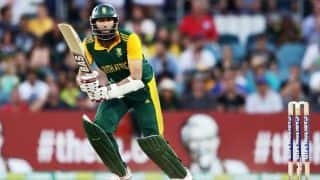