ICC Champions Trophy 2017: This was Pakistan's maiden victory over South Africa in the tournament's history.

In Match 7 of ICC Champions Trophy 2017, the predictably unpredictable Pakistan stunned South Africa to stay alive in the tournament, winning the contest by 19 runs (DLS method). South Africa were expected to run through a hapless Pakistani side who had posed no threat against India in their previous match. However, with the help of stunning performances by Hasan Ali and Imad Wasim, Pakistan restricted South Africa to a less competitive target. In reply, a brisk cameo from Fakhar Zaman and unbeaten innings from Babar Azam kept them ahead before the rain interruption. Here are some of the key moments from Wednesday’s clash, which overturned every cricket analyst’s prediction wrong. Full Cricket Scorecard: Pakistan vs South Africa, ICC Champions Trophy 2017

South Africa appear in a different jersey: Everyone was surprised when both sides took the field for national anthems. While Pakistan turned up in their usual green attire, South Africa were seen in their away kit. The match was regarded as Pakistan’s home venue, making Proteas appear in a yellow jersey (contrary to their regular, green outfit).

ABD’s golden duck: Opting to bat, South Africa started proceedings steadily at Edgbaston. Hashim Amla bought time in the middle and Quinton de Kock looked in no hurry. Nonetheless, from 40 for no loss, they were reduced to 60 for 2. AB de Villiers, after missing out in the tournament opener, was hellbent on turning the tide in a tough situation. However, he played a loose cut shot off his first delivery and it went straight to point as Imad struck for the second time.

As a result, Edgbaston was deprived of any show from the charismatic South African skipper. For de Villiers, this was his seventh nought (sixth in ICC event) and his maiden golden duck in ODIs.

Rameez Raja and his commentary stints: With South Africa choking in the middle overs, it looked like this would turn out to be a one-sided affair in favour of Pakistan. With wickets tumbling, Rameez Raja evoked no fun with his eloquence. His statements such as “no mean achievement”, “bats lower down the batting order”, among other cliches had no impact in the commentary box. (Side note: Aspiring writers rather take cue from the commentators in the 2oth century. Remember poetry in motion?)

Pakistani fielders defy odds: It is not a hidden fact that Pakistan are a shabby fielding side. Their game against India showed that they can easily drop sitters and remain rusty with their ground fielding. Nonetheless, Pakistan shocked everyone with their intent and application on Wednesday. They dived and curbed the quick singles in the inner circle and plucked two impressive catches by their standards.

Azam held onto a low catch at first slip, off Hasan, to get rid of JP Duminy. On the other hand, it looked like Hasan was inspired by his teammate and took the catch of the-innings in the final overs. Kagiso Rabada tried to make room and steer one towards mid-off and the pacer covered enough ground to dive full stretch and send Rabada packing.

Hasan was on verge of replicating Jerome Taylor: West Indies’ Taylor remains the only bowler to have taken a hattrick in the tournament’s history. Australia’s Mitchell Starc came close to becoming the second bowler in the game against Bangladesh before Hasan was on course at Edgbaston. He dismissed Duminy and Wayne Parnel, off a peach of a delivery, on consecutive balls before missing out on the significant feat as David Miller played out a yorker with ease.

Miller, Morris come to rescue: At 118 for 6 in 30 overs, South Africa were struggling for survival till the 40th over, but Miller and Morris steadied the ship. Known as aggressive customers, both batsmen understood need of the hour, applied themselves, and tried to stretch the innings till death overs. They added a vital 47-run stand in more than 10 overs with only a single four coming off Morris’ blade. The left-hand-right-hand combination ensured South Africa inched closer to the 200-run mark and provided a much-needed impetus.

Bizarre DRS call: With Pakistan sensing a chance to wrap up South Africa’s innings after Morris’ dismissal, they brought back Junaid Khan in the 43rd over. On his last ball, Junaid dropped it full and anticipated that the ball had hit Rabada’s toe with no connect off the willow, and convinced Sarfraz Ahmed to go upstairs for review. In the end, it turned out to be quit a dreadful decision as the South African played with a straight bat and smiled after seeing the decision going turning in his favour.

Amidst the impressive show with the ball and on the field, Pakistan finally delivered something unusual courtesy this uncalled-for review.

South Africa’s record eighth-wicket stand versus Pakistan: Before this encounter, South Africa’s highest eighth-wicket stand versus Pakistan (an unbeaten 45-run partnership shared between Mark Boucher and Lance Klusner) came in the ICC World Cup 1999 at Trent Bridge, Nottimgham. The yesteryear’s superstars registered an emphatic 3-wicket win chasing 221 courtesy their fightback. Nonetheless, the 18-year-long standing record was finally broken when Miller got company from Rabada. They took the team total above 200 by adding 48 runs including 3 boundaries.

‘Killer’ Miller finishes off in style: Being tentative against spin, not much was expected of Miller against the likes of Imad, Mohammad Hafeez and Shadab Khan. However, he stitched a composed innings (75* off 104) to stand tall amidst fall of wickets. He got support from Morris and Rabada, and helped his side play their full quota of overs. It was an innings of character from the usually attacking left-hander. Miller played according to the demands of the situation and worked the ball around till the 47th over.

With a solitary boundary (coming off the last ball of the innings) and 3 sixes, ‘Killer-Miller’ carved out a mature innings. He single-handedly took his team to 219 for 8 in 50 overs and will be in good stead ahead of the next game against India.

Fakhar Zaman’s early blitz followed by Morne Morkel’s strikes: The left-hander replaced Ahmed Shahzad in this crucial encounter. He opened the innings with Azhar Ali and began the onslaught from the word go. The left-hander, boasting of a good List A record, hammered Rabada for some blistering strokes and took the game away in the early overs. De Villiers’ felt the need to introduce his experienced bowler in Morkel, with Fakhar playing freely. The move worked as Morkel deceived him with a short ball, off a lovely off-cutter, and got rid of Azhar as well. Morkel, beaming in confidence, followed a barrage of short balls outside off stump to make the batsmen get to the pitch of the deliveries and keep them under check.

Tahir’s stunner wins heart: With back-to-back wickets, South Africa were on top. Hafeez and Azam led Pakistan’s reply with a measured 52-run stand for the third wicket. Hafeez, not known for rotation of strike, started slowly with some edges but stuck his end. Azam, on the other hand, carried a calm head and played the ball according to its merit. The pair got together in the 8th over and added a vital half-century stand before the senior pro pulled one towards fine-leg, and got out for a 53-ball 26. Tahir ran from the boundary ropes and dived to take a stunner and give Morkel his third scalp.

Tahir’s efforts and celebrations showed how much he wants to be involved in the scheme of things. Not being the quickest in a team known for acrobatic fielders, Tahir exhibited skills to rattle Hafeez.

Shoaib Malik, rain play spoilsport: After Hafeez’s fall, Malik came in the middle. He began in the same fashion as against India. With showers predicted, Malik timed the ball and played his shots to ensure Pakistan keep their nose ahead at the rain halt. His 14-ball 16 enabled Pakistan to end up 19 runs ahead (DLS method) as showers got heavier and prevented further play. South Africa competed but Pakistan were clearly the better team on the day. They, as a result of this victory, not only earned their maiden win over their opponents in Champions Trophy, but remained alive in the tournament. 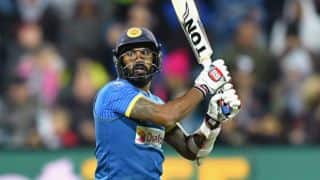