Pakistan and Sri Lanka produced a thrilling encounter in the first One-Day International (ODI) at Hambantota on Saturday. Abhijit Banare looks at the key moments of the day.

Sri Lanka and Pakistan played out a thrilling game at Hambantota as the tourists won it in the last over. Let us revisit some important highlights of the day.

Overcast conditions greet teams: Rain has been a frequent visitor in the Test series and there were ominous signs of rain disrupting the first One-Day International (ODI). It was very evident that the captains would be eager to chase rather than struggle with setting a target on a tough pitch early on and then fall prey to possible Duckworth Lewis (D/L) equations. It was Misbah-ul-Haq who won the toss and predictably inserted the home side to bat.

Pakistan grab early advantage: An hour of rain having reduced the match to 45-overs a side, Pakistan pacers were right on target. Pace department is something where they never fall short of resources. Mohammed Irfan, Junaid Khan (regaining fitness after the concussion threat in the second Test) and Wahab Riaz were their options for this match. Irfan and Junaid started off well and it was the former who struck first removing Tillakaratne Dilshan before the rain stoppage.

Fawad Alam’s ‘almost’ stunning catch: Pakistan fans don’t often dream of their fielders pulling off stunners but this could‘ve been a rare sight to watch. You know when Kumar Sangakkara drives through the covers the ball usually gets dispatched from the middle of his bat. This time around it was uppish and Fawad Alam flung himself to get that one and it stuck in to his hands. That was the last of the delightful fielding effort as Alam fell with his elbow hitting the ground and the ball popped out.

Lanka slip: In a span of two overs, Lanka lost Upul Tharanga and Sangakkara. Meanwhile, Dinesh Chandimal who was softened by the barrage of short balls from Irfan, conceded his wicket to a similar delivery from Wahab.

Mahela Jayawardene-Angelo Mathews snatch the momentum: Until the dismissal of Chandimal, Jayawardene had already got his eye in. Couple of boundaries from his bat indicated that the recently-retired Test cricketer was in for a long haul. He was joined by Angelo Mathews and together they showed a sense of purpose and maturity to take the innings ahead. Not taking their chances against Shahid Afridi and Mohammed Hafeez, the pair had soon helped the Lankan innings back on its feet.

Stat: During this innings, Jayawardene completed 25,000 runs including all formats of the game.

Just when they were looking to accelerate, Jayawardene was run-out for 68. Mathews, joined by the aggressive left-hander Thisara Perera added some impetus with big hits before Perera was removed by Wahab.

Ashan Priyanjan’s late flourish:  Priyanjan walked out to bat in the 42nd over. Junaid Khan bowled the next over and suddenly, the Lankan innings had rocketed to close to 250. Shuffling his footwork, Priyanjan had clearly frustrated Junaid and hammered four boundaries to pick 18 overall in the over. Though Mathews was dismissed in the next over, Priyanjan’s 15-ball 39 had taken Lanka to 274.

Breezy start for Pakistan: Chasing a stiff target, Ahmed Shehzad and Mohammad Hafeez had a fluent start before Hafeez was dismissed for 21. They had added 38 for the first wicket.

Middle-order mess-up: With Younis Khan joining in and Misbah to follow, the plan would’ve been about one batsman to anchor and Shehzad going for the runs. But Mathews, after removing Hafeez, got rid of Younis. He did something which he is not known to do Younis tried to go for the big one and ended up finding the lone man in the deep. With Shehzad and Umar Akmal on the crease, they had it in them to inject more pace in the Pakistan innings. But then, Akmal, like he has done numerous times in the past, gifts his wicket away to Thisara Perera with a 12-ball 15.

Shehzad departs for 49: Ahmed Shehzad was the backbone of the chase. He accumulated the singles and also found the boundaries to keep the pressure at bay. He was gone for a soft dismissal when Perera bowled him when the batsman tried to shuffle across a bit. The alarm bells had gone off as Pakistan looked set to falter. With Misbah too dismissed for 13, Lanka had a firm grip.

Alam-Maqsood’s final flourish: When Shoaib Maqsood and Alam came together, the required rate was inching closer to eight and by the time the duo got their eye in, it had moved closer to nine. But the duo held their cool and opened up slowly to keep the required rate in control. Their ploy seemed clear, take the match as close as possible before going for the final flourish. Sangakkara also blessed the partnership by missing a stumping of Maqsood early in his innings. The 147-run stand in 117 balls had given Pakistan a clear shot at an unlikely victory. Malinga got the better of Alam dismissing him for a 61-ball 62. Pakistan needed 23 in 18 balls — an easy task with the advent of T20s.

Afridi finishes off in style: There was no usual hara-kiri from Pakistan as Shahid Afridi and Maqsood brought the target down to five from the final over with Nuwan Kulasekara set to bowl. Two singles in two balls and then Afridi added some spice to it with two consecutive dot balls! But he was not going to give up as he got one past point to script a thrilling win. But Maqsood remained the hero with an unbeaten 89 from 73 balls. 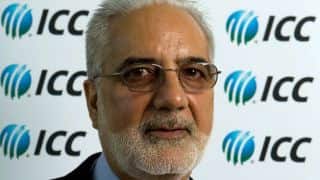 IS Bindra's career in cricket administration comes to an end 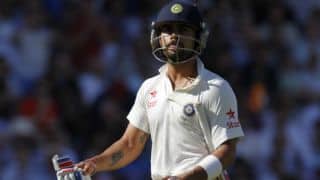 Virat Kohli may be the brand ambassador of ISL's Goa franchise