Here are a few highlights from Pakistan's six-wicket victory over Sri Lanka in Match 10 of Asia Cup T20 2016 at Mirpur on Friday.

Pakistan beat Sri Lanka by 6 wickets in Match 10 of Asia Cup T20 2016 at Mirpur on Friday. The match was a dead rubber between two eliminated teams, so in the context of the tournament the game was inconsequential. However, with an eye on ICC World T20 2016 the match gained a bit more significance. Both sides had their share of problems in the lead-up to the match, with the batting being the major cause for concern for each team. Luckily for both Pakistan and Sri Lanka, their batsmen managed to put in a good enough performance to give a bit of confidence moving into the World T20. Here are the highlights from the match. FULL CRICKET SCORECARD: Pakistan vs Sri Lanka, Asia Cup T20 2016, Match 10 at Dhaka

The Dinesh Chandimal-Tillakaratne Dilshan alliance: Chandimal and Dilshan put on 110 for the opening wicket in 14 overs. It was by far the best opening partnership of the tournament. Chandimal hit Mohammad Aamer for a boundary early in the match and there was no looking back after that. He got a boundary every other over, but at 26 for 0 after 5 overs it was Dilshan who finally cut loose. He hit Mohammad Nawaz for three fours and a six to take 18 off the sixth over. The momentum continued till at the end of the 14th over. Sri Lanka were sitting pretty at 110 for no loss. Chandimal was out off the first ball of the 15th over, hitting Wahab Riaz to Sharjeel Khan for 58 off 49 balls. FULL CRICKET BLOG: Pakistan vs Sri Lanka, Asia Cup T20 2016, Match 10 at Dhaka

Dilshan’s all-round brilliance: After Chandimal’s dismissal for 58 Dilshan took charge. He saw his partners tuble at the other end; Shehan Jayasuriya, Chamara Kapugedara, and Dasun Shanaka scored 6 runs between them but Dilshan did not let that affect him. He ended up unbeaten on 75 off 56 balls with 10 fours and 1 six. He was not done though; coming on to bowl the eighth over of Pakistan’s innings he got rid of Sharjeel Khan for 31 off 24 balls first ball. READ: All-round Pakistan trump Sri Lanka by 6 wickets in Asia Cup T20 2016 Match 10 at Mirpur

Mohammad Irfan’s excellent spell: It was by no means a run-fest, but Dilshan and Chandimal managed to keep Pakistan’s bowlers on the defensive. The impressive Aamer went at nearly 8 runs per over, Nawaz went for a massive 12.66 per over, and Wahab Riaz went for 7.50 per over. Mohammad Irfan managed to stand out in the bowling card. The seven-footer finished with figures of 2 for 18 in his four overs.

Pakistan batting finally comes together: It has been a frustrating few weeks for Pakistan cricket, with their batsmen continually failing to deliver post the Pakistan Super League (PSL). Sharjeel Khan was one of the major culprits, failing to come good despite an impressive PSL showing. He made amends with a quick fire 31 off 24 balls, hitting 5 fours — 4 of which came off successive deliveries — and 1 six. Sarfraz Ahmed continued his good run with a 27-ball 38 to help Pakistan come close, and Umar Akmal ensured that there were no hiccoughs with a fluent 48 off 37 balls. Akmal was out with 1 run needed to win, but Shoaib Malik remained unbeaten with 13 not out to score the winning runs. 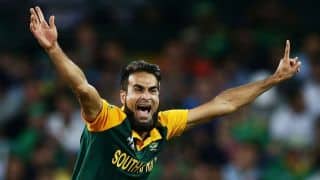 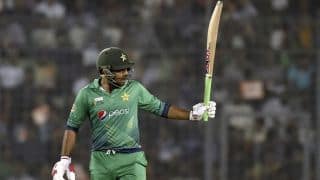