West Indies are set to start afresh against Pakistan in the first Test at Sabina Park in Kingston.

Shrugging off the ODI and T20I series losses, West Indies are set to start afresh against Pakistan in the first Test at Sabina Park in Kingston. The visitors would be eager to give it their all and make this Test a memorable one for their veterans Misbah-ul-Haq as well as Younis Khan, who will retire post this series. Meanwhile, West Indies look to be the perfect party-spoilers as they have introduced some debutants to add some spark. Meanwhile, Pakistan would have to go ahead without their pacer Hasan Ali who is been struck by a niggle. The practice match saw some runs flowing from the West Indies newbie while Pakistan s bowlers were at their best once again. Full Cricket Scorecard: Pakistan vs West Indies 1st Test at Sabina Park

This being a crucial tie for both the sides, here are some of the key clashes expected amidst the huge clash:

Babar Azam vs Alzzari Joseph: Both the players had a lean patch in their Test career and have the calibre to fire up the innings. Azam might have not have had the best series against Australia, but he showed glimpses of the talent he possesses against New Zealand notching up unbeaten 90. Interestingly he also got his maiden fifty against West Indies in Dubai.

Joseph, on the other hand, was an instant hit where he claimed three wickets on his debut against India. However, he managed to grab just two against Pakistan in Dubai. Which player is able to better their records is to watch out for.

Younis Khan vs Devendra Bishoo: This Test will be a memorable one for Younis not only because it will be the last series for him but also because he is approaching 10,000 Test runs (short by 49 runs). Younis brought his experience into play against Australia where he got to yet another century at Sydney and also scored a fifty at Brisbane.

Bishoo who usually enters in the middle-overs, ran through the Pakistan batting unit at UAE where he claimed 10-wicket haul that went in vain. He ended with 7-wicket haul in the final Test, ultimately leading to their only win in the three-match series. Can Devdendra Bishoo stop Younis Khan from achieving his record-breaking milestone? Pakistan vs West Indies 1st Test at Jamaica: Likely XIs for both sides

Mohammad Aamer vs Kraigg Brathwaite: Both these players open the innings for their respective sides and can provide the required start. Aamer might not have had a great tour against Australia, but he picked 6 wickets against West Indies at their second home. He also made a commendable comeback in the practice match. This could be the moment for Aamer to up the ante in absence of Hasan.

West Indies would place their best bet on opening batsman Kraigg who excelled in the series against Pakistan at UAE with an unbeaten century and 2 fifties. With both capable of firing the cylinders, one needs to wait and watch who can provide a blistering start.

Yasir Shah vs Shimron Hetmyer: It is a clash between a debutant vs ace Pakistan spinner. Yasir, who had the best of the series against West Indies ending with 20 wickets, saw a mediocre performance against Australia ending with 9 wickets. He, however, stepped up in the practice match and claimed 3 wickets, of which Hetmyer became Yasir s bunny twice.

Hetmyer began his journey to Test cricket on successful note as he raised 84 in the practice match. Pakistan needed a Yasir special to remove the top-order batsman. Hetmyer has been successful as a captain for the Under-19 side as well where he helped West Indies claim the Under-19 World Cup title. Can he overcome the Yasir challenge in the first Test? 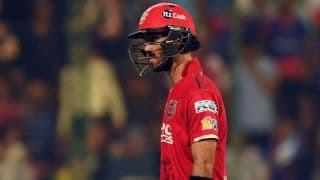