Pakistan were at one point all in control with opener Azhar Ali and Ahmed Shehzad scoring 155 runs for the first wicket. But three timely wickets by the hosts brought the game back at level.

West Indies managed to pick up 3 crucial wickets before the end of day’s play to drag things back in control, with Pakistan reaching 172 for 3 at stumps on Day Two of the second Test at Barbados. At one point, Pakistan were in control with openers Azhar Ali and Ahmed Shehzad scoring 155 runs for the first wicket. But 3 quick wickets claimed by the hosts’ bowlers hosts brought the game back at level. Pakistan are still behind West Indies by 140 runs in the first innings with Azhar and captain Misbah-ul-Haq batting on 81 and 7 respectively. Let s have a look at some of the highlights of the day’s play that grabbed the attention: Live Cricket Scorecard, Pakistan vs West Indies, 2nd Test at Barbados

The West Indies collapse: The moment for which Pakistan had been waiting for since the third session of Day One, came on the third delivery of Day Two. Mohammad Abbas bowled a good length delivery which nipped back into right-hander Holder (58) who got caught in two minds whether to go for his shot or not. Holder, in a dilemma, eventually got an inside edged through to the wicketkeeper Sarfraz Ahmed s gloves. In second over of the day from Mohammad Aamer, he had dismissed Chase, who top scored for the Caribbean side. Aamer slanted a delivery which Chase (131) poked his bat at and Younis Khan snaffled it just before the ball hit the ground, in the slip cordon.

West Indies lost both their set batsmen in the first two overs which was followed by Abbas snaffling the wicket of Bishoo (14), taking his four-for. Yasir Shah completed the formalities by dismissing Alzarri Joseph (8), and thus ended the West Indies innings at 312.

Ahmed Shehzad and reprieves: Ahmed Shehzad got reprieve twice in the second session. The first came against Shannon Gabriel who pinned the batsman in front of off stump. He looked plumb and the umpire raised his finger making no delay. But Pakistan went for the review and the reply showed Gabriel’s front leg had landed outside the allowed limits.

The second reprieve came in the dying stages when Shehzad danced down almost half the crease against Roston Chase. Chase fired it in down the leg side which wicketkeeper Shane Dowrich gathered to break the stumps. But umpires had some doubt about and hence asked to check the no-ball. And out of nowhere, Chase had bowled a no-ball. While Chase is not a repeat offender like Gabriel in bowling front-foot no-balls, West Indies were once again seen at the wrong end of things, paying the price for not being disciplined enough. But for the defence of Chase, that no-ball was the first of his Test career.

The boundary scarce: Runs came very slowly for Pakistan in the second session. Both openers, Azhar and Shehzad, managed to score just 70 runs in the 25 overs. Both the batsmen dealt in singles and also the Caribbean bowler s bowled stringent line not letting them free their arms. The flow of runs was so scarce that it was after 52 deliveries and around 48 minutes that Azhar scored a boundary against Holder.

A stitched 155-run stand: Pakistan openers had a forgettable outing at Sabina Park and with 312 runs put on the board by the hosts, they needed a good start. Rightly so, Azhar and Shehzad took a lot of time to get things going. They majority of time dealt in singles and doubles, and hardly took any risks. Azhar and Shehzad were being extra cautiously, and looked content in letting the ball go into wicketkeeper s gloves if pitched well outside off. This conservative approach led to frustration amongst the West Indies camp as sloppy fielding was witnessed leading to extra runs as the game progressed. They scored 155 runs in 335 deliveries at 2.77 runs per over (RPO).

The Pakistan collapse: The last few overs brought West Indies back in the thick of things. Their persistent bowling yielded them three crucial wickets of Shehzad (70), Babar Azam (0) and Younis Khan (0) within a matter of 6 overs. Devendra Bishoo played a vital role by getting 2 wickets as Gabriel also chipped in with 1 wicket. Within 6 overs, Pakistan were reduced from 155 for no loss to 161 for 3. 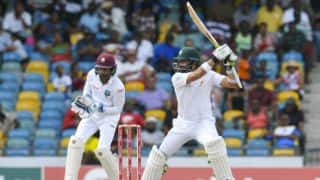