Pakistan the No. 2 ranked side in ICC Test ranking will take on No. 8 ranked West Indies in their maiden day-night Test match.

Pakistan after successfully strong-arming England in their own backyard now look to overpower West Indies in their second home i.e (U.A.E). Pakistan and West Indies clash in a three-Test series to conclude a rather flop tour for the visitors. West Indies have been win-less on this tour losing the One-Day International (ODI) series and Twenty20 International (T20I) series by rather appalling manner. Pakistan will hope a change of guard in the captaincy won’t affect their winning chariot, with Misbah-ul-Haq taking over reins from the young and often critiqued Azhar Ali. FULL CRICKET SCORECARD: Pakistan vs West Indies, 1st Test match

Pakistan named a 14-member squad for the first Test to be played at the Dubai International Cricket Stadium in Dubai. This will be also the first time Pakistan and West Indies play a day-night Test in their cricketing history. Players from both the sides have expressed excitement and reservations about the behavior of pink ball under lights, which makes this affair an even more scrumptious. Pakistan were jolted badly even before the commencement of the Test as their most experienced batsman Younis Khan was ruled out due to dengue.

Lets have a read about how the Pakistan XI could shape up for their first-ever day-night Test:

Pakistan has moved on from their regular opener Mohammad Hafeez, who is not been favored by their current chief selector Inzamam-ul-Haq. Hafeez has been a regular member of the injury list during tours, and hence needs to prove his fitness. Another opener from the England series Shah Masood has been dropped, who did not have the best of times against the red-ball.

Pakistan’s ODI skipper Azhar Ali will be asked to do the opening duties. Azhar had a good ODI series scoring a hundred in the first ODI, struggled with the bat in the following games. In the last Test he player Azhar looked solid scoring a crucial 49 in the first innings and a quick fire 30 to guide Pakistan to a memorable series leveller. Azhar scored as many 295 runs for Pakistan against England to remain their second highest run getter in the series. Sami Aslam showed his skills with the bat against England in the Test series. Aslam used his footwork and showed why he can don the role of an opener which Pakistan is in desperate need of.

Coming in at No.3 will be the highly talented Asad Shafiq, to his credit head coach Mickey Arthur complimented his style to that of the legend Sachin Tendulkar. Asad against England proved why he can very well be the main stay of Pakistan’s batting line-up once the likes of Misbah and Younis decide to call it a day. Asad technical prowess along with his cool, calm and steady head approach has been praised by one and all.

In the absence of Younis, the middle order duties will be taken over by Babar Azam. Azam has been selected for the first time in a Test scenario, will be wanting to make it a more regular affair. Coming from making three back-to-back hundreds in the ODI series, he will be keen to continue his run making chariot in the most ‘Test’ed of conditions. Azam will be aware that once Younis recovers he will have to make way but a sturdy show here, could very well be next in line to replace the legend if and when he retires.

Misbah, Pakistan’s supremely agile and reliable batsman, who is also their most successful Test skipper, will be back again in the white’s. Misbah hasn’t shown any signs of slowing down after recording his first ever Test ton at Lord’s ably leading the team to a controversy free England tour. Misbah will once again be under the microscope to perform, stock pile runs and become a guiding light for the youngsters in the team.

Misbah will be followed by Pakistan’s T20I skipper Sarfraz Ahmed. Sarfraz has time and again being touted as the teams most underrated player. Sarfraz’s footwork against fast bowlers is commendable, his quickness to pick-up the line and length is spot-on. Sarfraz is also a swift runner between the wickets. Winning the T20I series would have instilled confidence which Sarfraz will want to transfer that into this batting form.

ODI specialist Mohammad Nawaz in all likelihood will play the role for an all-rounder. Nawaz played a crucial part in bowling cog during the ODI series with his left-arm spin.

Bowling: Pakistan’s bowling looks the most sorted under UAE conditions. Wahab Riaz who bowled his heart out in England was unlucky not to pick up wickets by the bulk. Riaz was good in spells but was also erratic. Riaz’s new ball partner Mohammad Aamer will look to improve on his show from the Test series against England. Aamer was not able to make a major impact with the ball but slowly looked to get into his rhythm. Aamer was the chief wrecker during the Australia’s 2014-15 series in the UAE will look to rekindle similar form.

Pakistan’s best bowler in the recent past Yasir Shah will be under the scanner post his impressive run in the England series. Both wins for Pakistan were thanks to the Yasir’s exploits with the ball. UAE wicket’s will be suitable to his bowling were he will eye a bag full of scalps to his name.

Rahat Ali will be making a comeback into the team after being ruled out from the Oval Test. Rahat was brilliant in Old Trafford will want to get back into his devastation best. Rahat with his pace and bounce will cause problems to the inexperienced batsmen from West Indies. 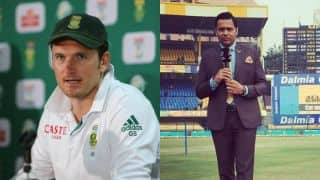