Pakistan won the fifth ODI by 4 wickets against England and avoided a whitewash.

The fifth One-Day International (ODI) of the series between England and Pakistan was played at Cardiff. After winning the toss, Pakistan invited England to bat. They lost their first three wickets with 92 on the board but thanks to Jason Roy and Ben Stokes, who scored 87 and 75 respectively, which ensured England got to a good total of 302 for 9 in. In reply, Pakistan once again did not get off to a good start as they were reduced to 77 for 3, including two wickets in an over from Mark Wood. Like Roy and Stokes, Sarfraz Ahmed and Shoaib Malik played a similar role for Pakistan and added 163 for the fourth wicket. In the end, Mohammad Rizwan and Imad Wasim won the match for Pakistan, which was their only victory in this series. Despite this loss, England won the series 4-1 and on this occasion, Abhishek Kumar presents some interesting statistical highlights from the match. Full Cricket Scorecard: Pakistan vs England 5th ODI at Cardiff

1. First instance of Ben Stokes scoring fifties in consecutive in ODI innings. His last two match scores are 75 and 69. Also, by scoring 75 in this match, Stokes registered his career-best in ODIs.

3. Sarfraz Ahmed became first Pakistan batsman to score 300 runs in an ODI series against England. Previous best was of 252 runs by Javed Miandad against England in 1987.

4. Imad Wasim remained unbeaten in the entire series. He scored 153 runs from 4 matches in this series at a strike rate of 102.

5. Roy scored 87 in this match and completed his 1,000 runs in ODI cricket. Since ICC Cricket 2015 World Cup, Roy is the fourth English batsman to score 1,000 runs in ODIs, others being Joe Root, Alex hales and Eoin Morgan.

7. This is the third time when England defeated Pakistan in an ODI series by 4-1. Other two such series wins came in 1992 and 2012. First of those three win came in England and the second took place in UAE.

8. More than 500 runs were scored by England fourth and fifth wicket pairs in this series, which is most in a bilateral ODI series. Previous best for England was of 486 runs in South Africa in 2004-05.

9. England and Pakistan are playing ODIs since 1974 but still there has been no five-wicket haul registered by any English bowler against Pakistan in any ODI.

10. This is Pakistan’s first ODI victory against any full member side after nine back-to-back defeats. Their last ODI victory also came against England in 2015 at Abu Dhabi. 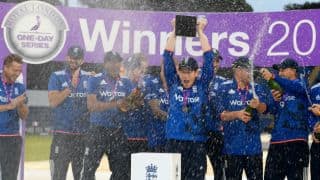 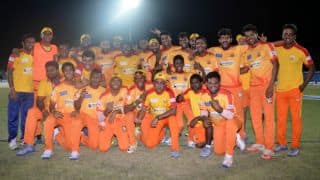