Pankaj Singh became the first Rajasthan cricketer to play Test cricket in over two decades. Abhishek Mukherjee looks at the others from Rajasthan who had had the honours.

Though Rajasthan (earlier Rajputana) always had a rich heritage of cricket, they had not produced as many Test cricketers as they ideally should have. They were easily the second-best side in India during Bombay’s Ranji Trophy dominance from 1958-59 to 1972-73.  Rajasthan became runners-up four times in a row from 1960-61 to 1963-64, and eight times between 1960-61 and 1973-74. It was not until 2010-11 that they won a title, and repeated the feat next season.

The two pillars of Rajasthan cricket during their era of dominance — Raj Singh Dungarpur and Kishen Rungta — never played at the highest level; a few other champions (Suryaveer Singh immediately comes to mind) had missed out for one reason or the other. Some others, on the other hand, did. Let us have a look at the list.

1. Parthasarathy Sharma and Pankaj Singh have not played Ranji Trophy for any other side.

2. This list contains cricketers who have played Test cricket while playing for Rajasthan. The likes of Arvind Apte, Hrishikesh Kanitkar, Aakash Chopra, Ramesh Powar have played for Rajasthan after their Test days were over, so they do not count.

3. Gagan Khoda, Kabir Ali, and Vikram Solanki have played international cricket, but not Test cricket during their tenure for Rajasthan. 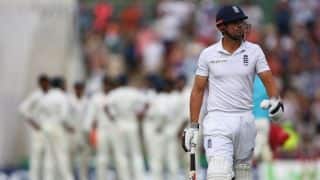 Alastair Cook: You never silence everyone, that is the nature of the beast