Pankaj Singh has been exceptional in the domestic circuit for many years.

Pankaj Singh gets his first Test cap as Ishant Sharma injured himself ahead of the third Test against England at Southampton. For years, Pankaj has been an extremely consistent bowler in domestic cricket, yet was ignored by the selectors. Nishad Pai Vaidya writes about Pankaj’s journey as he dons the Test cap.

An injury to the hero of Lord’s paves the way for the domestic workhorse. Pankaj Singh has waited for this moment for years and Ishant Sharma’s injury has allowed him to win the Test cap at Southampton. This is a reward for years of consistency at the domestic level, where he has been a crucial part of a successful Rajasthan setup that won back-to-back Ranji Trophy titles in 2011 and 2012. His story is one that would inspire many domestic stars, who are waiting for their big moment in the sun. Fate had tested him all these years, but he has managed to come up and win the treasured cap. It is said that when you truly wish for something, the universe conspires for you to get it. Pankaj is one man who would agree!

Pankaj was first picked in the Indian team on their 2007-08 tour to Australia. On that tour, he didn’t get an opportunity as India preferred Irfan Pathan, RP Singh, Ishant and Zaheer Khan. Back then, he may have contested with Ishant for that spot in the line-up and it is quite ironic that he comes in his place at Southampton. Pankaj then had to wait for two years before getting another stint in the Indian team, when he played a One-Day International (ODI) on the tour to Zimbabwe.

It was quite bizarre that Pankaj was being ignored by the selectors for all these years despite consistent performances. Following another great season, which ended with a six-for in the Irani Trophy, it would have been injustice if he was overlooked again. Here is his track record in domestic cricket since 2009:

Apart from the 2011-12 season, he has averaged under 30 in all the others since 2009. This year, he also put in a good performance against a formidable Karnataka side during the Irani Trophy. On a greenish surface, Rest of India (ROI) were bundled out and Karnataka were piling the runs. Pankaj was one saving grace for ROI. He bowled on a perfect length and also got some movement. That may have played a huge role in his selection given the fact that the selectors were there when it happened.

Pankaj has seen many other, more junior seamers, shoot ahead of him in the pecking order in the last six years. Most of them have fallen by the wayside, unable to cement their spots. When compared to his record in domestic cricket, they weren’t as impressive. Thus, this is an opportunity for Pankaj to showcase that domestic form at the highest level. This is his chance to show what India may have missed! 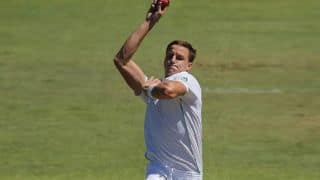