In Nepal, he is the greatest role model at this moment. He is polite, polished and has a clear vision towards life. He wanted be an architectural engineer, but ended up being Nepal’s cricket captain. He is Paras Khadka. Sandipan Banerjee interviews the most popular cricketer from Nepal, ahead of their campaign in ICC World T20 Qualifiers.

On Tuesday, the Nepal cricket team is boarding the flight for London for their month-long ‘Europe Tour’. On this  trip, they will first acclimatise in the Netherlands and later play a four-match T20 International (T20I) series against their hosts, which will serve as a preparation for the upcoming ICC World T20 Qualifiers, scheduled between July 6-26 in Ireland and Scotland.

Before leaving for this important tour, Nepal captain Paras Khadka spoke exclusively to CricketCountry and shared his views about the upcoming assignment, cricket in Nepal and on many other topics. Here are the excerpts from his interview:

CricketCountry (CC):  The next one month is going to be crucial for Nepal cricket. It will decide their future in ICC World T20 2016. How prepared your team is for this challenge?

Paras Khadka (PK): Yes, the next one month will be very challenging for us. We had a good outing in ICC World T20 2012 and are desperate to play the next edition in India. Talking of preparations, Nepal have a good team for T20 format. All our boys were in Dharamsala recently to get themselves ready for the Qualifiers. READ: BCCI should back Nepal cricket, feels Nepal coach

To acclimatise with the conditions in Europe, we are reaching there a couple of weeks early. Prior to the qualifiers, we will be playing four T20Is against Netherlands. So we are getting enough opportunities to be in best shape for the tournament. Now it all depends on our hunger for success.

CC: The conditions in Ireland and Scotland will be quite alien for your boys. It doesn’t suit the strength of your team. What is your plan to tackle these?

PK:  Yes, the conditions over there will be challenging for us, but this won’t be the first time we will be playing in these conditions. We have played in England before, and Ireland and Scotland will be quite similar. Besides, we have quite a few good pacers and all-rounders who can be handy on those wickets. We have to make the best use of our resources. In T20, anything is possible and I am quite confident about my team’s chances.

CC: As a top batsman of this team, how are you getting yourself ready to play on those conditions?

PK: I have practised on green-tops during our stay in Dharamsala. I also have prior experience of playing on similar pitches. So adjusting to those decks won’t be a huge issue for me.

CC: Do you think you should open the batting?

PK: I have not yet decided on that. We will find out after accessing the conditions.

CC: Your team was recently in Dharamsala to do their preparations for this ‘Europe Tour’. How much support your team have got from Board of Control for Cricket in India (BCCI) during stay in India?

PK:  Most of our training facilities and grounds back home were ruined by the earthquake. It was a great gesture by Anurag Thakur and BCCI to allow us to use their facilities doing our preparations. I would like to thank Himachal Pradesh Cricket Association (HPCA) as well. I hope this is the start of the long standing relationship between BCCI and Nepal cricket. We need the help and guidance of BCCI to develop our cricket. READ: BCCI offers Nepal cricketers opportunity to train at Dharmsala ahead of ICC World T20 qualifier

CC: You recently represented MCC along with players like Yuvraj Singh and Alastair Cook. How was that experience?

PK: Oh! That was an amazing experience! Getting opportunity to play alongside Test cricketers and veteran county cricketers was really great for me. It taught me a lot. Players like Yuvraj and others advised me to keep working hard, that’s the only key to success.

CC: You are one of the rare cricketers to have taken a wicket with your first ball in international cricket. How does it feel?

PK: It felt nice. But we won the game, that pleases me more.

CC: Nepal has suffered a lot following the devastating earthquake in April. How has been the recovery?

PK: Not only cricket, the whole country was affected. But now there is no point on thinking of what happened. The key is to get back to normal life, and for me that means playing cricket. I am happy that we are back on the field playing cricket. The nation is recovering from that devastation, and we are on the right track. A good performance by Nepal team in upcoming tournaments can heal some of the wounds. READ: Cricket will grow in Nepal, says Bhawana Ghimire

CC: Will cricket be the same in Nepal?

PK: Definitely. It will grow even bigger. 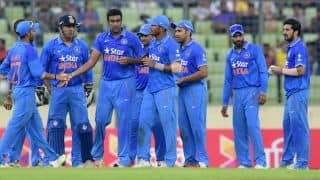